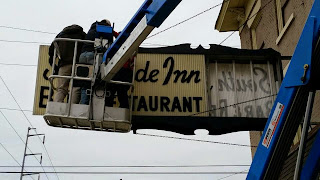 Former site of South Side Inn to reopen as Big Four Burgers in early May, by Kevin Gibson (Insider Louisville)

... Owner Matt McMahan, who last year also opened Charlie Noble’s Eatery & Draught House in Sellersburg, signed a lease on the property last September and has been working feverishly to reimagine the space as a companion to the original Jeffersonville location of Big Four while also paying tribute to the South Side’s heritage.


As stated recently, a food and dining relaunch by New Albany's non-incentivized entrepreneurs is under way.

Donum Dei Brewery is open for business off Grant Line Road, just behind the El Nopal. Earlier this week, our favorite Mexican chef gave me a tour of Israel's Delicias de Mexico on Market Street, and it's getting closer. He'll be using the entire ground floor, with a small outdoor area to the rear. The Habana Blues move might start at any time, and until then, it's business as usual. Coqui's Cafe ha started freshening up the old Little Chef space. Finally, Earth Friends Cafe is rounding into full weekly hours and a return to the larger menu at Bank Street Brewhouse.

Once Habana Blues leaves its current site on the ground floor of the former New Albany Inn, there'll be remodeling there by owner Matt Chalfant for a future tenant, and the Coyle site developers from Indianapolis will be using their stockpile of graciously waived sewer tap fees to include restaurant space at the historic auto dealership building on Spring -- unless, of course, Dan Coffey needs spare change and engineers a back alley CCE demolition for kickbacks and giggles.

There'll be sitting politicians seeking to take credit for these positive occurrences. When they do, ask them why they continue to kneecap small business development by refusing to move on walkable streets to tie everything together -- you know, like in parts of the world where crane operators and trucking companies don't call all the shots, and mayors aren't scared of their shadows.
Posted by The New Albanian at 3/25/2015 07:39:00 AM