A bit more about ongoing changes at Bank Street Brewhouse. 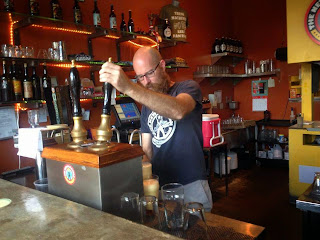 “Beginning today (Tuesday, March 10), Bank Street Brewhouse will be temporarily closed for maintenance and a light refresh of the space.  Our goal is to reopen in 1-2 weeks. We’ll keep you updated. It’s business as usual at the Pizzeria and Public House with Gravity Head 2015 still going strong.

The past two weeks have been tiring, and if anything, I’m learning that a “leave of absence” can be comprehensive only if you leave the country, although this would make it difficult to run for mayor.

However, I’m gradually shifting into the operational notion of the LOA.

Prior to my announcement on February 26, numerous work-related themes already were in progress at NABC, primarily as pertain to the front-of-house setup at Bank Street Brewhouse.

It isn’t odd that this work would continue without me, as we have the world’s finest employees.

Concurrently, it isn’t surprising that when there are three owners and one of them steps aside for a bit, the two remaining owners do just as they’ve always done, and make daily decisions (the New Albanian Sisters also are making the sales rounds).

It’s just odd being on the outside looking in, and not doing the writing. Fortunately, we have a wonderful propagandist on staff.

In the continuing evolution of NABC’s Bank Street Brewhouse, it’s sometimes necessary to end one good thing so that another good thing can take its place. With that in mind, we announce that our ride with Taco Punk has reached its conclusion. Effective immediately, Taco Punk service at BSB is no more. We greatly appreciate Gabe Sowder’s efforts and wish him well in his future endeavors. The tacos were great. We ate lots of them.


Our man Stephen also needed a break. He’s been working almost constantly at the tap room since last May, when the original BSB kitchen closed. Last week he was ill, and we didn't have anyone else to work. As remodeling proceeds, he gets some much needed time off.

The overarching news: Spiffing up, painting and rebooting means a new food service tenant, one with longer hours and more options than Taco Punk was able to provide. It’s an established, proven operation, and if I could tell you more, I would, but that’s as much as I’m empowered to reveal at this time.

The bad part: Among other realities, the maintenance period precludes meetings of Drinking Progressively. Sorry about that, but we’ll be back.

Apologies for the inconvenience of being closed, primarily for those accustomed to filling growlers. Given that our original location is closed on Sunday, I hope there’ll be only one Sunday down before regular hours resume. But the bonus is that with a new food service partner, Sunday brunch might be resuscitated. MIGHT. Don’t hold me to that … I’m not really here, remember?

In short, things are changing, and I’m pleased, because George Bernard Shaw was right: “Progress is impossible without change, and those who cannot change their minds cannot change anything.”

I’d like to change New Albany, and my business is changing itself. The key to both might well be brains and beers in sync.