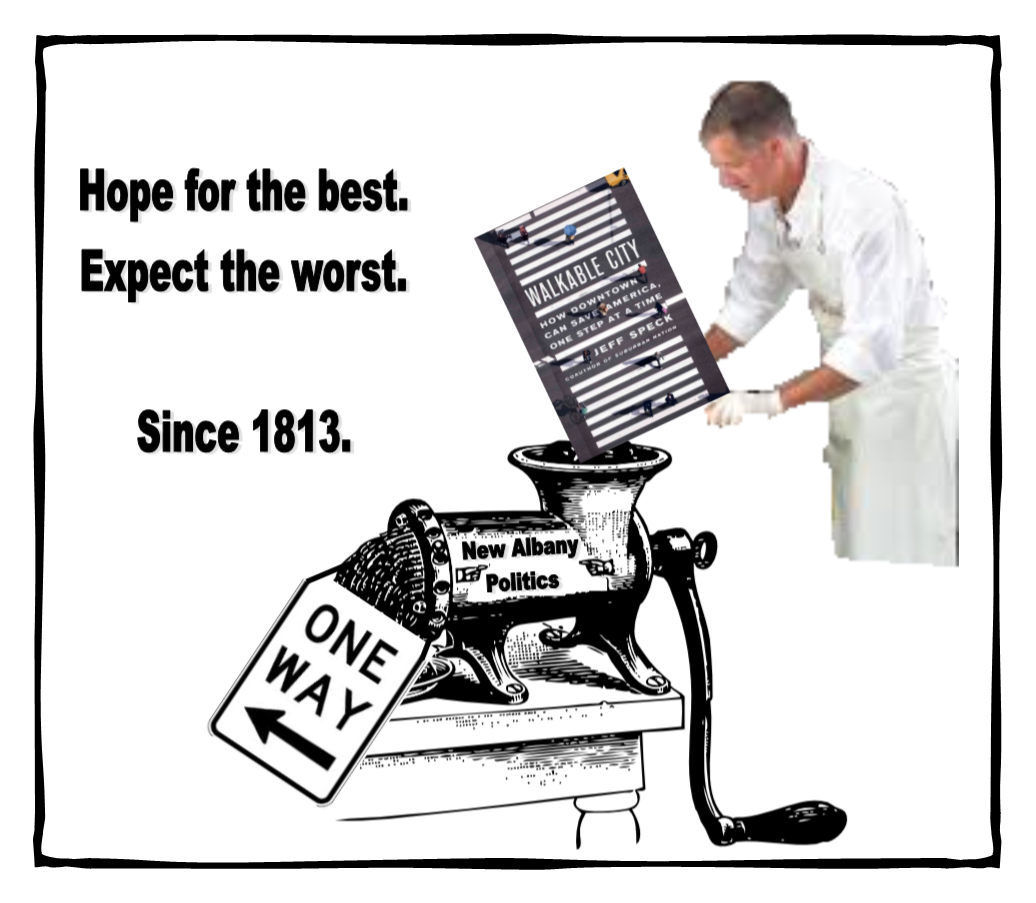 The first Speck amputation was announced yesterday, as improvements suggested for the State Street corridor were unceremoniously jettisoned sans substantive explanation from Warren Naps for fear he might be awakened during the meeting.

The Bookseller said it best:

"I'm sincerely not trying to be dense, but didn't New Albany just pay the foremost expert on the continent $75,000 for a 'conceptual plan?' Jeff Speck's action program is ready to implement, but, by the design of the mayor and his campaign team, it will be delayed for purely electoral purposes. I hope it backfires."

And this remains as true today as when I wrote it four months ago.

ON THE AVENUES SUNDAY SPECIAL: How many businesses already have died because of City Hall’s street grid procrastination?

... Luckily, a Third Floor insider explained it to me last week in plainer English:

Two way streets? You won't get them from Jeff Gahan. He doesn’t think there’s a problem, and if there is, he thinks it will just go away and solve itself. He’s scared to death – and he’s getting most of his information from Duggins. All the trust is gone.


Strong words … but so far, amply buttressed by observable reality and the administration’s own bizarrely frank admissions.


I'm told that there is a need to compromise and sing kumbaya with those incapable of adding 2 and 2 without arriving at 15. As such, here is my mayoral platform plank as it pertains to Speck's proposals.

Upon assuming the office of mayor, I will immediately act to implement Speck's proposals, with as close to 100% accuracy as possible. My compromise is this: The streets thus reconfigured, all of Mr Padgett's trucks may continue to use the city's grid with no extra charge. Indeed, we're entitled to our own opinions, just not our own facts. Two way streets now.

That gurgling sound you hear somewhere off in the distance?

NEW ALBANY — The city is moving into a conceptual development phase as it determines what course of action to take in response to planner Jeff Speck’s streets proposal ...

... Mayor Jeff Gahan’s administration has largely not committed to any of the Speck plan. New Albany Board of Public Works and Safety President Warren Nash announced Tuesday the city will continue to weigh the study and feedback from the public ...

... The city has decided to scrap a portion of the Speck study that called for the establishment of a bicycle lane on State Street near Floyd Memorial Hospital and Health Services.