Park comparisons get worse: Breaking ground on an overpriced copy.

Below is a Rundell Ernstberger Associates rendering of the soon to be Bicentennial Park in New Albany. I've been questioning design decisions and the exorbitant $537,000 construction cost. That elicited a response from REA landscape architect Pete Andriot who, among other things, suggested I check out Canan Commons (built for $708,000 per Andriot) in Muncie, Indiana, to see what other midsize cities are doing with urban parks. 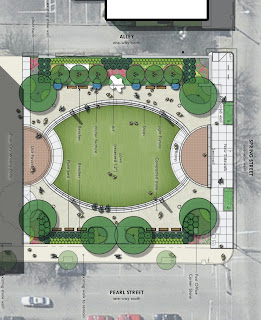 The next image is a Rundell Ernstberger Associates rendering of that comparison park, the recently opened Canan Commons. Immediately noticeable is that the shapes and placement in the respective designs are unmistakably similar, if not copied outright. New Albany, apparently, just cut REA a $50,000 check for what's at best a highly derivative design for which Muncie already paid. So much for originality and site and community specificity. That's some grievously bad design karma. 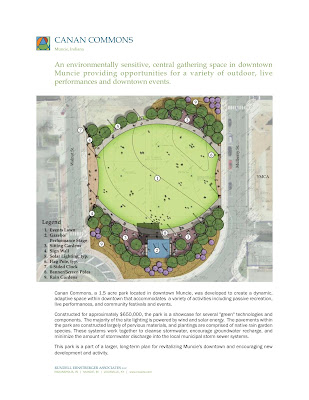 While the aesthetics are nearly identical, the similarities stop there and the differences do not work in New Albany's favor. While Bicentennial Park in New Albany is a small, corner lot of approximately 16,200 square feet, Canan Commons is 1.5 acres or 65,340 square feet. Andriot asked me to consider per square foot cost for park comparisons. In this case, New Albany is paying $33.15 per square foot and Muncie paid $10.84 per square foot. Andriot mentioned the inclusion of fountains in New Albany as a major cost driver at $100,000, but Canan Commons includes a large, covered performance stage (shown below in use) that cost $300,000.

Also discussed were drainage issues at the park, with Andriot citing the need for better water handling as a reason for the $40,000 recessed lawn in New Albany. As several know from speaking with me about the park over the past few days, I've expressed confusion as to why digging such an expensive hole - one that in itself will create drainage issues (as evidenced by REA's inclusion of overflows in its design to avoid flooding) - would be better than rain gardens, the construction of which could not only function as a lower cost, run-off solution but as a community-building, environmental education event for the bicentennial as well.

With a more inclusive and replicable approach to water management in place, substituting the seating afforded by the hole would be both comparatively cheap and changeable as park usage patterns materialize over time. Others suggested that, given the large amount of money we're spending, alternative energy sources might be pursued for the park.

Imagine, then, finding the following text (viewable by clicking the rendering above) from Rundell Ernstberger Associates attached to the documentation of the much less expensive per square foot Canan Commons:

Constructed for approximately $650,000, the park is a showcase for several "green" technologies and components. The majority of the site lighting is powered by wind and solar energy. The pavements within the park are constructed largely of pervious materials, and plantings are comprised of native rain garden species. These systems work together to cleanse stormwater, encourage groundwater recharge, and minimize the amount of stormwater discharge into the local municipal storm sewer systems.


If I'm not mistaken, the official groundbreaking (I suppose the trees didn't count) for Bicentennial Park is this evening at 6:00 p.m.. It's a shame that these and other issues were not earlier addressed via the facilitation of a public input process, but it's not too late to correct our path, include a community whose ideas and resources I'm sure go well beyond mine, and develop a park about which we can be proud instead of accepting an overpriced, lesser developed copy from another town. This bicentennial is as much about the next 200 years as it is the last. We shouldn't start it by settling.

Now the question, will anyone respond? City, Bicentennial Committee, REA?

My guess is they will not. It's already a done deal; various boards and bodies disinterested in scrutiny have allocated the money and gotten out of the way -- because some folks can be trusted, while others must be scrutinized.

As Roger alludes, step one is finding out who's willing to openly ask questions.

To answer the previous question, there was no public charette process on this project. It was not part of the program or the budget.

That's not what you want to hear, but it's the truth.

As to the design being "derivative", I would disagree. An elliptical lawn surrounded by perimeter plantings is no more derivative than any building is derivative because it has four walls and a roof. Elliptical or circular lawn surrounded by walls or walks (greenswards) have been part of the Western landscape vernacular since the 1600s.

As far as Muncie getting the 'greener' park, everything in the quoted verbiage would also apply to New Albany, with the exception of the solar lights. I believe those were donated by a local manufacturer in Muncie.

It seems pretty clear that you don't perceive any value in what REA does, and while i disagree with you, I'm not going to belabor the point. REA has over 30 years of experience designing plazas and parks around the midwest. Sometimes there is a pubic involvement process, sometimes there isn't. I absolutely understand the value inherent in the public participation process. I wish there had been one here.

In the end, I stand behind the quality of the spaces we design. I hope that maybe you can be objective enough to give the park a chance. I do believe that it is going to be an asset to downtown.

For a $50,000 allotment, there should have been plenty of time and money for charrettes, plural, especially for such a small design.

Analogizing the quickly repeated choice of an elliptical lawn with circular indentations on each end as a primary design element with a building having four walls and a roof is hardly apt. Despite the general presence of said walls and roofs, architects have managed for centuries to make them appear and function quite differently. All buildings aren't perfectly square, are they or built from the same materials? If they were, there would be no need for architects.

Are you saying Bicentennial Park in New Albany will be wind powered and have rain gardens and largely pervious surfaces? None of that is labeled in the rendering nor has been shared publicly. Those could be positive attributes.

However, if rain gardens and pervious surfaces are indeed plentiful, then recessing the lawn seems more a decision about seating than run-off. As I mentioned previously, seating could be addressed at a much lower cost and in a more adaptable way, even if attached to start. It's far easier to unbolt a bench and move it, for instance, than it is to fill a large hole and replant.

As park usage patterns become clearer, the recessed lawn will make it much more difficult to adjust the physical surroundings to suit. As is, such a strong, "permanent" physical feature will largely serve as a limiting factor in determining those usage choices and perhaps in choosing to use the space at all. If there isn't supposed to be any use beyond the occasional sit-down alone or with friends, then the amount we're spending is even more outrageous than imagined due to significant overdesign.

I perceive great value in design and architecture in general and public spaces more particularly. As such, I've experienced enough design and worked with enough designers to very much hope that what I'm seeing here in New Albany isn't terribly representative of what REA does.

I'd like to see the park be an asset as well but, with four years to have corrected course since the park was first mentioned, we're off to an especially bad late start and changes once built will be cost prohibitive.

Perhaps it wasn't REA that excluded the public.

I don't believe REA excluded the public. REA merely accepted the terms offered it and took the suckers' money.

My guess: The Bicentennial Commission, originally intended as an apendage of the croneyist England administration (and consequently operating mostly without political oversight) demanded park building haste, hence non-participation from the public.

Regardless of who played which role in getting us to this point, I'll just repeat: It's not too late to change it.

It isn't too late to change it ... but in practical terms, it's difficult to imagine a scenario in which our caliber of political personages would even tap on the brakes. As we write, they're queuing to determine the order of names on the plaque.

Mr. Andriot,
I know squat about design so I'll leave that to others. I do appreciate your willingness to engage and explain your viewpoints. (and I even learned a thing or two)