ON THE AVENUES: Wonderful and delightful harvesting. 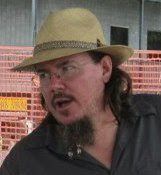 ON THE AVENUES: Wonderful and delightful harvesting.

Properly rendered, civic festivals are just the sort of exercise to promote good times, unite the citizenry, help us bond through joy and alcohol (come to think of it, that’s a redundancy), and maybe provide another yearly excuse to conduct deep street cleaning – preferably, both before and after the crowds come through.

When it comes to civic festivals, New Albany prefers bludgeoning over stilettos, and in rhetorical terms, so do I, and yet it probably isn’t readily apparent that my feelings about Harvest Homecoming are more nuanced than they often appear.

For those just tuning in, Harvest Homecoming is New Albany’s annual 800-lb civic gorilla, or stated more mildly, it is the granddaddy of all festivals in this fair city. The itinerant carnies’ arrival preceded last weekend’s parade, and starting today, the heart of the historic business district downtown is handed over to Harvest Homecoming’s mysterious, Kremlinesque governing committee for four solid days of throng-crowded booths, manned by locals and mercenaries alike, dispensing foodstuffs, arts, crafts, politics and anti-abortion counseling, and completely disrupting any semblance of commerce as usual.

For decades, there was little objection to Harvest Homecoming’s invasion of downtown, because downtown was a ghost town. Now it isn’t, and dynamic revitalization has a predictable way of igniting a revolution of rising expectations among a new generation of downtown business owners, investors and clients. These are plain facts. As yet, there is no obvious solution to dynamism’s clash with conservatism, primarily because the low level of daily communication between various interested parties makes sparse dialogue between North and South Korea look like a beer hall sing-along in Munich.

Yes, there have been painstakingly slow and incremental concessions, and as Harvest Homecoming generationally reloads, the festival is going through a necessary process of reinvention. But from the standpoint of downtown business, the root equation remains largely unaltered: Harvest Homecoming’s own business model is dependent on the existence of a clean downtown slate that no longer exists, and if anything, will grow less adaptive to the festival’s needs in coming years.

My personal nuances are these: I don’t dislike the idea of Harvest Homecoming, only its current implementation. I believe it can be adapted to take full advantage of potential symmetry between it and an evolving downtown business district, without sacrificing its tradition, and to the benefit of all parties involved. I envision a downtown food and drink court on the current booth grid, one maximizing the uniqueness of our burgeoning dining scene, retaining space for booths while not blocking year-long purveyors. I foresee a celebration of what downtown New Albany is, and is becoming.

We’ve considered another pressing question many times previously: Do we need a second major civic festival in New Albany?

Whatever its future disposition, Harvest Homecoming has the autumn outdoor imagery slot locked up tight, and in late April, two weeks of Kentucky Derby revelry usually consumes Southern Indiana residents and then spits them back out in mid-May, after the horse pimps have moved on.

A few years back, there was a springtime Da Vinci fest in downtown New Albany, which in retrospect may have been just slightly before its time. Da Vinci’s twist was a bicycle racing component; if it ever were to be resurrected, I’d like to see beercycling events take place, too. Of course, a dozen or more weekends annually are booked with local and regional church picnics, concerts and specialized fetes. Finding an open date for our second major civic festival might be difficult, indeed.

(While none of the preceding can compete in scale and impact with the true heavyweight world fests – Oktoberfest, Mardi Gras, Running with the Bulls, or that lesser-known fete in Spain where they have tomato fights – the violence inherent in each of these, real or imagined, certainly qualifies them as worth copying for Bicentennial fundraising opportunities.)

With the chair’s permission, permit me to repeat my civic festival proposal: To be held on Election Day in November, it calls for the exaltation of meat loaf.

Not upper-case Meat Loaf, as in Marvin Aday, who always wanted to sleep on it, but lower-case meat loaf: The myth, the legend and the great extender, tastily stretching limited household meats and means. Meat loaves of varying composition are rock solid staples in cultural, culinary repertoires the world over.

Great meat loaves? There’s a certain ring to that, and a growling of stomachs.

Does head cheese qualify as meat loaf? I think so. Pig parts congealed in aspic and formed into a quivering block definitely merit a side competition for the more adventurous, because after all, aren’t we past the whole catsup glaze notion? Instead, our competition will encourage creativity. You can barbecue meat loaf, make it Cuban, or substitute Honey Cream doughnuts for filler.

Why Election Day for this festive “New Albany Loves Meat Loaf” gig? It’s an apt metaphor for a municipality (and county) with budgets long since pared of lean and fat, where we’re down to cooking the bones for a bit of flavoring marrow.

Saint (and mercifully soon to be former governor) Daniels already has the 99% in Indiana dining on meat loaf, and so we might as well learn a few recipes sooner rather than later, if not for eating ourselves, then maybe for paying the municipal workers.
Posted by The New Albanian at 10/11/2012 12:06:00 AM