The Market Street (New Albany) location of La Rosita's is open, and you need to go there, now. 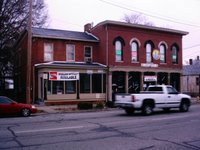 Back in October, LEO’s erudite reviewer Marty Rosen (now writing for the Courier-Journal) effectively kicked off the La Rosita’s craze in New Albany by exposing Israel Laudin’s tiny taqueria on Charlestown Road to an audience far larger than that afforded by an already considerable local word of mouth.

Soon La Rosita deservedly became a Louisville-area media staple, and its cramped quarters were packed at all hours.

Meanwhile, closer to New Albany’s urban core at 1515 E. Market, the on-again, off-again experiment in conceptual vertigo known as California’s was lurching unsteadily toward another of many costume changes. During winter, it finally ground to a halt, and shortly thereafter a banner was unfurled announcing the forthcoming arrival of a second and expanded La Rosita’s at the site.

Now it is open, and thriving, and yesterday we finally found the time to make the short (and chilly) three-block walk and give it a try.

Verily, it was a life-altering experience.

I’d eaten previously at the Charlestown Road taqueria, and at the new second location, that basic and tasty menu has been supplemented by extras that space constraints at the original location precluded. The gratifying result is a high quality, inexpensive and enjoyable eatery that continues to change the way New Albanians think about Mexican cooking.

The differences between the routes traveled by these two establishments, La Rosita’s and California’s, are instructive. While well-meaning people lacking the necessary experience in the restaurant field conceived California’s, food service veterans with the aim of cooking fresh and authentic Mexican food started La Rosita’s.

I’ve not met Israel’s wife, but he is a passionate and talented man after my own heart, in the sense that he’s seemingly on a mission to de-Americanize his native cuisine, and is willing to patiently explain the ingredients and techniques to all those willing to listen. As our friend Bluegill noted, “that man can cook,” and he certainly can, but beyond even that, he can teach, too.

Forget what you think you know about Mexican food – like many of us, you learned it incorrectly at Tumbleweed, anyway – and note the absence of “enchilada style” and Wisconsin cheddar on the La Rosita’s menu. In their place are an array of freshly conceived sauces, moist and white Chihuahua cheese, and delectable meats ranging from the standards to tongue, goat and homemade chorizo.

My lunch on Saturday was a beef tongue taco and a chorizo gordita, with fresh flan for dessert. Diana enjoyed a huge vegetarian burrito. Mexican soft drinks are available, but we had water and iced tea, with the final tally coming to a very reasonable $17 for two.

Israel and I discussed the prospects for an NABC beer tap once he follows through on his plan to buy a keg box, and while conceding that he doesn’t drink beer and knows little about it, he noted that several customers had already asked him about having an NABC beer on draft.

Of course, I’m very interested in doing it – but which one would be best?

It would have to be one of the five ales we’re committed to brewing on a regular basis: Bob’s Old 15-B, Community Dark, Croupier IPA, Elector and Hoptimus.

Of these, Elector and Hoptimus probably would be too big, and Community Dark wouldn’t be necessary where Dos Equis is pouring. Bob’s is a smooth Porter, and Croupier pale and nicely hoppy, but not completely over the top. Either would serve as fine complements to Israel’s delicious food – think of Mexican seasonings, cilantro, peppers, tomatoes and savory meats, and the semi-sweet, chocolate-tinged Bob’s … or the assertive, balanced bitterness of the Croupier.

I’m interested in your opinion, but my vote goes to Croupier. That’s spelled “crupier” en Espanol.

La Rosita’s hours at the Market Street location are 11:00 a.m. Monday through Sunday, to 9:00 p.m. weekdays, later on Friday and Saturday, earlier on Sunday evening.

Personally, I'd opt for the Croupier, especially given the hops-chipotle possibilities.

It never really occurred to me that I'd be able to walk down the street to a restaurant run by a Mexican chef named Israel who speaks French. Beer just seems to somehow suit the situation.

Croupier, por favor. If I were you, I'd consider bartering for flan.

well the man already has our praise for having realistic and workable hours.

we can't wait to try it out!

We visited their first week--the food was fantastic, but they were having trouble getting servers. How's their service now that they have a few weeks under their belt?

I have had lunch there several times and have had good food each time.

I would have to go with the same nod as Jon and Jeff, the Croupier is The fit for that kind of grub.

Will go there this up coming week.

He ain't fibbin' - it's that good. My wife also eats vegetarian and had no trouble finding great selections both times we've been.

As for beer, I vote for Croupier. He has Negra Modelo (and I think some Sangria) in the cooler until then.

Jim and I and some friends checked it out a few weeks ago. The prices were inexpensive, the food was wonderful, and the service was GREAT! I am somewhat squeamish, but I wanted to try the beef tongue. I was not willing to commit to it. The waiter actually brought a plate of beef tongue out for us to all try for free. I was surprised by how tender and flavorful it was. I highly recommend the place.