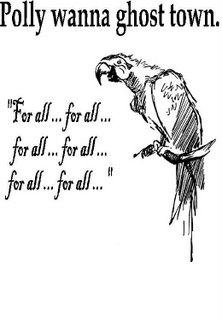 Our friend Healthblogger will be interested to know that in light of complaints brought before the city council by residents of Martin Drive, a residential street adjacent to Floyd Memorial Hospital, to the effect that the hospital regularly discharges unknown liquids into a nearby creek, 1st District Councilman Dan Coffey plans to phone hospital chieftain Bryant Hanson first thing Tuesday morning.

That’ll teach Hanson. Five minutes in, and he'll be confessing to the murder of Abraham Lincoln.

“Sometimes you need to get the big dog,” commented CM Coffey at the conclusion of yet another lengthy digression into areas of personal expertise so pervasive and encompassing that it seems somehow selfish and even rude that New Albany should restrict his pettifogging to such a small, simple stage as ours.

He needs higher ground, bigger fish to fry, and vast, open space to spread his wings and soar to the heights of achievement with the Eriks and Brambleberries.

Without sonar, it’s difficult to chart CM Coffey’s many and varied council night nadirs, but my personal nominee for last evening’s lowlight came as the Wizard of Westside and his conjoined obstructionist, 3rd District Councilman Steve Price, joined to savage Economic Development Director Paul Wheatley and the female director of a program called Art Studio, which was founded with organizational assistance from a similar program in Louisville and a $20,000 grant from the Caesar’s Foundation.

More grants are being sought to continue the program, which is designed as a unique outreach to talented public school students. As an interim measure, and in seeking a “partnership” for the city in the program, Wheatley came before the council to ask for $5,000 as a bridge to future grants.

As for what followed, it should suffice to say that when CM Price intones, “I’m all for the arts, believe me,” it’s not unlike the feeling you get when a piranha winks and opts for the salad bar.

What followed was a vintage duet not unlike George and Tammy as the Siamese Councilman damned the ideas of art and education with the barest discernable trace of praise, dragging all their familiar bogeymen into the fray, including CM Price’s congenital fear that any action taken today might prove to have been the wrong one in hindsight, and CM Coffey’s axe grinding sparks of venom toward a county government that Wheatley should have known better to ask for money prior to troubling the Wiz – and while you’re at it Paul, couldn’t you have tried to pick the pockets of the parks department first, since they’ve been known to do artsy fartsy things for the urchins?

All of it was delivered by CM Coffey in the patronizing tone of the schoolyard boor, typically something that emanates from the vocal chords of the planet’s insecure charlatans, who unfortunately know a captive audience when they see it, and plan their strangleholds accordingly.

People on the street would have the good sense to run away from such a prolonged and agonizing verbal spectacle, but when the council assembles for duty, all those gathered for their lesson in civics have no choice except to listen to CM Coffey until he’s damned good and finished.

Twice monthly, it’s a veritable filibuster, albeit it one conducted for no tactical purpose beyond a vendetta against the modern world and the sense of satisfaction that comes from saying twice as many words aloud in one evening as the remaining council members combined … and, maddeningly, in spite of the accumulated weight of all that knowledge about so many different topics, CM Coffey still was able to state on at least three occasions last night alone “it’s the first I’ve heard about it.”

So much for omniscience -- not that our expectations were high.

Meanwhile, there were other contentious items on last night’s agenda, ranging from stormwater to sewers, and from hiring firemen to whether a Pandora's Box is as good as a Two-Edged Sword to a blind Ward Heeler.

Consider this an open thread and an invitation to discuss.

The meeting was interessting . The Mr. Coffey and Mr. Price stated that until we know what is the 2006 budget is for the City of Ne Albnay the STUDIO2000 resolution should not be funded, for we are in bad financial situation, until the county council weighs in. But they approved amending the salary ordinance to provide for salary raises for city employees and passed with out discussion borrowing from TIF( how are we to pay this borrowing back?). Where is the logical tread? I found this "Very Interesting" to quote Artie Johnson form Rowan & Martin Laugh-In.

I wonder if Dan Coffey even knows Mr. Hanson.

At about 5'2" the only thing big is his salary and his ego. That's why he is called "little Napolean"

Nevertheless, it would be an interesting conversation.

I would like to confirm what Chad McCormick said last night that IUS Biology classes under the direction of Dr. Claude Baker and myself will be assisting the city on the stream assessments as required under the storm water quality mgmt. program as a community sevice to the city at no charge, be looking for official statements soon.