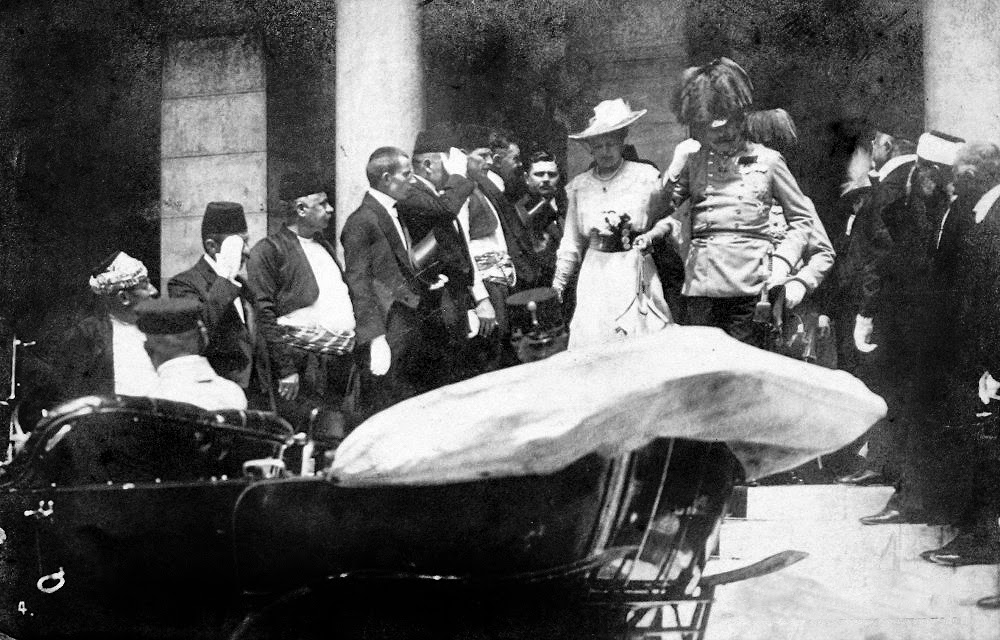 This is the image that started it all for me. It shows the heir to the throne of Austria-Hungary and his wife, exiting the town hall in Sarajevo and unwittingly preparing for an appointment with destiny via two well-placed gunshots from Gavrilo Princip.

It was 100 years ago today, and the people pictured above are not happy. It was about to get worse.

The irony of the Archduke's death is that it provided the pretext for the cataclysm of the Great War (now known as World War I). Franz Ferdinand may have been an unsympathetic, disagreeable figure in many ways, but he understood what so many other did not: His empire was not equipped to fight a modern, industrial war. Six weeks after his death, Austria-Hungary invaded tiny Serbia, and was mauled repeatedly by the Serbs until Germany came to the rescue. Meanwhile, general conflict had erupted throughout Europe, the consequences of which endure a century later.

From 1985 through 2006, the life of Franz Ferdinand was a recurring motif in my Central European travels. In 2008, I attempted to explain it, at least in part. It is my hope some day to have the chance to retrace these steps, all in one trip through the former Habsburg lands.

Readers of history already know the emperor Franz Joseph's nephew, Archduke Franz Ferdinand, as the man whose 1914 assassination in Sarajevo lit the fuse for the Great War. As for me, since my very first visit to Europe in 1985, when I made a visit to Austria's national military museum for the sole purpose of viewing the Archduke's blood-splattered tunic and the automobile he and his wife were using to drive through Sarajevo when Gavrilo Princip's bullets ended their lives, visiting the various Central European locales on the Franz Ferdinand heritage trail has been a constant attraction.

The military museum was first, and also in 1985, I walked through the crypt of the Austrian emperors in Vienna precisely to see where Franz Ferdinand and his wife are not buried – and this absence is a very important part of the overall story.

The Archduke was a blunt, obnoxious, violent, unlikable and repressed human being who in his spare time enjoyed slaughtering wildlife under the guise of hunting.

He also did something decidedly uncommon among his brethren European royalty of the age: He fell madly in love, and remained just as madly in love, with a woman decreed by the royal court to be inadequately marriageable for an heir to the throne, and so he married her anyway, even though doing so forced him to renounce the path of succession for the children, and to acknowledge that Sophie could not participate in the normal trappings of royal life … or enjoy an eternal resting place alongside the properly accredited Habsburg family members.

Inexplicably, the otherwise indefensible Franz Ferdinand was transformed into the perfect family man at home in various estates and castles scattered throughout the realm … but, not unexpectedly, his perceived mistreatment at the hands of protocol rankled, and he nursed a smoldering grudge until the end of his life, which came in Sarajevo during a journey of largely unnecessary semi-official business that was undertaken because it geographically placed he and his wife outside the direct control of the court, inside a province that had been annexed only a short time before, and enabled him to provide his wife, albeit it briefly, with the "official" perks denied her otherwise.

All this meant less than nothing to a young group of nationalistic Bosnian revolutionary conspirators who detested the empire and were being trained and financed by a covert arm of the independent Serbian kingdom's military arm in Belgrade ("Black Hand"), and thus we are brought back to Sarajevo, where the motley crew of inflamed and malnourished terrorists plotted their tragicomic ambush of the Archduke.

To start, a bomb was inexpertly tossed. It bounced off the hood of Franz Ferdinand's car and ignited on the one following it, injuring a subaltern. The bomb thrower sought first to drown himself, jumping from an adjacent bridge into the two-foot-deep river, then, thwarted, tried to ingest poison that wasn't poison. He was quickly arrested and the group dissolved in panic, with Princip adjourning to the curb outside a coffee house to morosely consider the failures of the botched performance.

Meanwhile, in spite of the bomb attempt and further warnings that security could not be guaranteed, a supremely annoyed Archduke elected to finish the official visit to Sarajevo's town hall, resulting in one of the most incredible photos you'll ever see, with the bedecked Austrian royal visibly bursting veins while minor officials in vests and fezes offer tepid and embarrassed salutes. The fear in their eyes is palpable even in the ancient black and white photo. A bad moon is about to rise, and they know it.

But nothing can be done when it comes to fate, especially in the Balkans.

Sure enough, perhaps an hour later, the motorcade resumed without the Archduke's staff having communicated to the lead driver a slight change in route undertaken to make the return safer. Having missed the turn, the cars were halted on the street directly outside the coffee shop where Princip now emerged to find his original target stock still and seated only 20 feet away, posing for the crosshairs. Princip fired two shots, one each for Franz Ferdinand and Sophie, both inexplicably perfect in aim, and within moments, the heir and his wife were both dead.

Throughout my subsequent travels, I've visited the Archduke's "hunting lodge" in Benesov, outside Prague, consumed the beer brewed in his name nearby, returned to Vienna to tour the Belvedere Palace (his official residence), and finally in 2003, arduously climbed the steep side of the Danube valley on a bicycle for the privilege of seeing the ancestral castle at Artstetten, and being presented the key to the mausoleum by the lady on duty so that after twenty-two years, the couple's graves could at last be viewed and my respects offered.

But Sarajevo in 1987 remains the benchmark. The town hall, the bridge and the museum located where the coffee shop had been … the footprints in the concrete sidewalk to show where Princip stood when he struck his blows against the empire … and the ambience of this strange old town with minarets and church spires both Catholic and Eastern Orthodox, not to mention synagogues, nestled together on a hillside, with the sprawling newer town encompassing a winter Olympics complex.
Posted by The New Albanian at 6/28/2014 08:14:00 AM