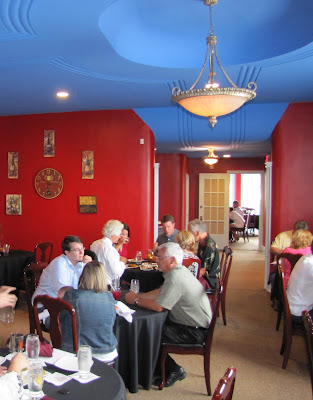 Habana Blues Tapas Restaurant opens tonight in the space formerly occupied by the Windsor, and before it, the pioneering Bistro New Albany. On Thursday night, there was a pre-opening gathering, and I’d like to thank Mike Kopp inviting us to participate. I had the pleasure of meeting the owner and chef last night. They’re young, committed and enthused.

Like all openings, it will take time for the system to be smooth and efficient, so treat your experience accordingly. Hours are projected to be Monday – Saturday, 11:00 a.m. to 10:00 p.m., with the bar staying open as late as trade supports. 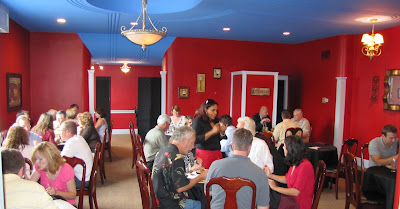 Habana Blues represents a wonderfully different cultural concept in downtown New Albany’s on-going development, and I’ve cobbled together the following cheat sheet. Keep scrolling for more information on each notion. At the end, you’ll find the answer to the question: Why the vivid reds and blues? 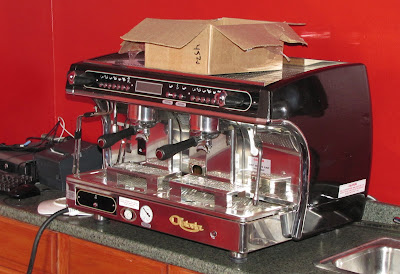 "Cuban cuisine is a fusion of Spanish, African and Caribbean cuisines. Cuban recipes share spices and techniques with Spanish and African cooking, with some Caribbean influence in spice and flavor. This results in a unique, interesting and flavorful blend of the several different cultural influences … during colonial times, Cuba was an important port for trade, and many Spaniards who lived there brought their culinary traditions along with them."
Tapas at about.com:

"What are Tapas? Tapas are snacks, canapés or finger food. Tapas come in many different forms and can vary from town to town."

The Mojito, at Taste of Cuba:

"There are countless recipes for the Mojito (pronounced moh-HEE-toh), but this version is for the one Hemingway himself enjoyed at the Mojito's place of birth: La Bodeguita del Medio in Havana, Cuba."

While there are shared characteristics, Cuban cuisine differs from Mexican, as we’re about to see gloriously showcased at the new La Rosita’s on Pearl Street. Habana Blues further defines its niche concept by focusing on tapas, cold and warm, which take up most of the menu (there also are soups, salads and sandwiches, including the famed Cuban).

The very basis of tapas is communal and relaxed. Don’t think in terms of an entrée. Instead, order several tapas and graze while enjoying a libation. As for the colors, consider the Cuban flag.

Agreed. It's vibrant, and makes a statement. I expect the overall experience to be fresher and considerably more energetic than before.

I can't wait to try it out! I'm rooting for their success. That will be a gem to have in New Albany.

Sometimes good things have to go so better ones can take their place.

I have been told that these folks are related to the owners of Havana Rumba in Louisville, which is a great place to go.

Having something similar in New Albany is a real treat, and now that there will be a new place in the former Treets, Fish House, and Paul's One World Cafe, hopefully downtown will once again take another swing at success.

I overheard a comment last night to the effect that as establishments go out, the newer ones taking their places keep raising the bar.

No one ever said the downtown food and drink biz was going to be easy, even with the 3-way permit boost. The fundamental things still apply. We still seem to be beating the average in terms of closing rates, and the quality keeps getting better. Niches are developing. Traditions are being established.

I'm frankly enthused. Habana Blues, combined with the forthcoming expanded La Rosita's, fits the scenario of the preceding assessment, but there's another absolutely vital component of both: Enhanced multi-cultural identity in downtown, in general.

It's only been two years since the downtown antique dealer blathered about voting against Barack Obama because of race. We continue along the path of refuting sentiments like that, don't we?

Too bad that bridge tolls work against the rosy picture I just painted.