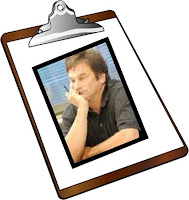 Before we document the 3rd district uncouncilman’s revealingly ill-tempered sex-act-and-defecation outburst at the library on Saturday -- that's right, within whispering distance of the kiddie section -- let’s look back at a bit of pertinent information posted here last week.

Or maybe it's a religious ritual?

Owning a rental property is more than an investment — it's a business. You have to be willing and able to commit the time and resources necessary to run your business successfully.
--GMAC Mortgage website

Did you know that to search the Internet for “rental property” +business is to generate more than 3,000,000 hits?

Yes, G, (Price) said it, apparently right after he told Lloyd that he'd do whatever he could to fight it (rental registrations).

He played most of his in-meeting comments to the landlords in the crowd, bemoaning what a tough business rental property is, which I'm sure you saw.

It's paraphrased but here's the gist:

After the meeting, an already angry Steve interrupted my conversation with another committee member.

"You're wrong. Rental property ain't a business", he said.

I told him that it is and asked what he did for a living.

He then went into a semi-intelligible tirade about how it wasn't. I asked him what he did for a living.

He told me my house (which serves as a family residence only) was a business. I asked him what he did for a living.

He hollered that he didn't want to pay any more taxes. I asked what taxes he was talking about since there hadn't been any additional taxes discussed. And then I asked him what he did for a living.

When he started to say something else unrelated, I told him to answer the question about what he did for a living.

"I'm barely breaking even", he said. "I'm living off my council salary."

"Just because your business is struggling," I said, "it doesn't mean it's not a business."

With that he turned for the door, repeated some of the stuff he'd said earlier about people wanting guys with clipboards running around, and then finally pronounced "This is all a bunch of fucking bullshit" as he headed out.

The funniest part to me is Price's unintentionally candid (and ever elastic) definition of "business": It's a business if you're making money, but not if times are hard. Price isn't making any money off my rental properties, therefore, they no longer constitute a business. Right. It hasn't stopped him from incorporating a business entity, has it?

I'm guessing Price's state of affairs has more to do with business expertise and the normal cycle of business than the nature of business itself, but perhaps I'm misunderstanding him. That's an easy thing to do. Listening to Price speak publicly is rather like trying to read a goat path map of Tibet -- upside down.

But those priceless expletives … well, the meaning is clear. Ironically, taken together, they also aptly describe the quality of the “work” Price has done during his tenure as councilman.

The same general attitude also helps encapsulate our eternal gratitude that council president Gahan has appointed the transparently biased Price to the rental committee. Before this, Gahan gifted the Urban Enterprise Association board with precisely the same befuddled personage (attendance record: 3 "present"and 5 "absent" so far this year).

Actually, "fucking bullshit" describes Gahan's recent attitude toward the community in general just as pithily as it does Price's historically cavalier disregard for his 3rd district neighbors.

Perhaps, then, we should file this under "be careful what you wish for," because having asked for consistency, Gahan's now giving it to us.

What was Mayor Englands words....
He was "ashamed of New Albany", if our leaders act like this in public, who can really blame him!
The public gets tosses (or "ejaculated") for mentioning a wrong, and not truly in a boisterous manner, yet councilmen curse and yell.
Democracy, dont you just love it!

I like many of us who participate in these debates have had business ventures go south. We’ve had to face the questions of “How am I pay my personal bills & living expenses?” or “How am I going to support my family now?”

Having had not one but two instances in which I had to walk away with my tail tucked, I understand Steve’s fear of that potentially hanging over his head even though that fear is unfounded. Unfounded at least in that “we people” are not out to get those who are conducting business the right way.

And yes McGillicutty, if you are contributing to the continued destruction of our city, we are committed to making it difficult for you to do so!

I also have always had the impression that CM Price’s heart, however misguided, was in the right place in as far as the less fortunate of his district are concerned.

What I cannot fathom is why; even when presented with evidence to prove it, he can’t or won attempt to see that what is proposed will overall serve to better the lives of his constituents in both the short and long term.

As was pointed out Saturday morning, there are funds available, albeit not as prolific as they once were, to assist those most in need to keep and maintain there homes.

There are neighborhood groups, block-watch groups, church groups, and the list goes on and on. The biggest barrier to those opportunities not being taken advantage of is #1, those in need not being aware of them and #2, once informed their unwillingness to ask for help.

Would it not behoove our Councilmen to educate themselves on the services outside of city government in order that they might work with these various entities to get the word out to their constituents instead of fighting them tooth & nail?

Can they really not recognize that these measures are designed to make their districts cleaner, safer, and more user friendly for all who live in them?

Do they not hear when law enforcement, fire departments, and civic groups testify to the deplorable conditions that exist in our communities?

As to the Fee’s & Taxes fear it is unfounded as well. This thing can be structured so that the fees, if any, are nominal while the fines for non-compliance are rigid. Will the city have to contribute something to the cause? Quite possibly for that is what cities do to solve their shortcomings. They at least help pay for them! For the record, we aren’t talking six figures here even if funding is required.

And if my might digress just for a second to the “business” question, I’ve yet to find a banker that wouldn’t tell me that “If you can’t afford to run a business, you have no business attempting to!”

Let's see, Ford is losing money. According to Mr. Price, Ford is not a business.

I agree that Mr. Price's argument that "property rental is not a business" is very sad. However, as rental properties are already taxed at a higher rate, I object to ANY fee for registration. This would result in double taxation. The good council can just allocate those higher property tax dollars already collected to pay for enforcement (yuh, right).
And here's to those rental owners like myself who do it right, yet have to pay for those who do it wrong. That'r right, bring on the enforcers, I would willingly submit to any inspection. We're not all slumlords, some of us actually take pride in keeping our properties better than those in the neighborhood.

cpalifer,
A lot of business's are taxed at higher rates and still have to pay for additional licenses, permits, etc. Our business has to pay "unloading fees" in many towns that we deliver to.

I salute you for your welcoming stance on inspections. You are smart enough to know that it will only help your business to get the slum lords out of business.

I was under the impression that when it comes to property taxes, my business is taxed at a higher rate than rental property operators (and both of us higher than homeowning inhabitants).

Are you talking about other forms of taxation? Please give us the lowdown.

Rental property does not qualify for homestead deductions and other exemptions. But as a business, under the new taxing regime, it is protected from being taxed any more than at 2% of value. Other businesses are capped at 3%.

On top of that, there is rampant fraud without registration when absentee landlords "pretend" to be resident for taxation purposes and claim the homestead exemption.

And don't forget that the costs of repairs/improvements to rental properties are tax-deductible, unlike 99% of the same to private residences. It has been my experience that improvements to a rental property results in attracting a more reliable, responsible tenant - and you can increase the rent. Of course, if the intention is to rent to transients, collecting the first and last months' rents and then churn the property when they miss the next payment, that's a different and much less desirable model - greed and exploitation.