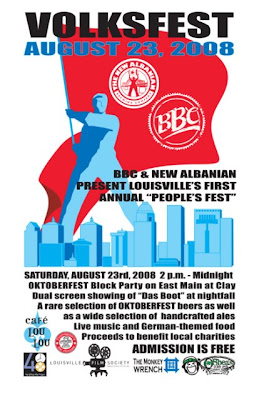 From the press release:

VOLKSFEST 2008: Presented by BBC and The Taprooom, New Albanian Brewing and O'Shea's

On Saturday, August 23, 2008 two great breweries of Kentuckiana come together to present a fest of the people -“VOLKSFEST” 2008! Festivities are from 2:00 p.m. -midnight and will include German food, a German theme movie plus live local rock n roll!

BBC & New Albanian Brewing will be blocking off Clay Street between East Market & Main and will be spicing up a usual sleepy Saturday downtown scene. This event is open to the public and is FREE, with proceeds from food and beer to benefit Juvenile Diabetes Research Foundation, St. Vincent DePaul Society and Louisville Film Society Educational Arm.

The “VOLKSFEST” will also feature a movie awards ceremony hosted by 48 Hours Film Project, which, will take place at dusk and will be followed by a dual screen showing of the German classic “Das Boot” presented by Louisville Film Society. German entertainment will be from 2 pm to 4 pm, and then local bands will take the stage to keep the evening rocking.

All ages are welcomed so everyone will want to be downtown for a fest of the people … VOLKSFEST 2008!