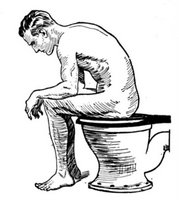 Somewhere behind today’s breathless, tabloid-style coverage of the conclusion of the second in a series of fiscally ruinous Camm trials, both local newspapers noted this piece of good, if not great news:

The ruling issued by EPA's Chicago regional office yesterday accelerates the first of three sets of "sewer credits" the city would get as it makes improvements aimed at preventing overflows of the sewer system.

Meanwhile, observers are reporting nervous calm at the Luddite Bar & Grill, where good news like this often is greeted with spasms of outrage, violent self-flagellation and numerous jello shots.

Efforts to make contact with Trog Sham through the venerable rotary dial payphone were unsuccessful, but the lone protester standing in front of the sewage treatment plant this morning had this to say before accusing the questioner of being “one of them pergressives”:

yes it is good news and I am also happy to report that we are on schedule for compliance with the Storm water Rule 13 May 1st deadline. The Data collection for stream visual assessments, illicit discharge and facilities inventory will begin in late March and we anticipate the wrap up by the second week of April thanks to our IUS volunteers.

the city was notified of this on feb.6th officially--of what the stipulations would be and have known about it since december--news is a little slow getting out to the public-----rates will still have to goup quite a bit to make the bond payment in the fall