Actually no, I won't consider voting for a Gahan/Dickey-like centrist presidential candidate. The Democrats can do much better than capitulation. 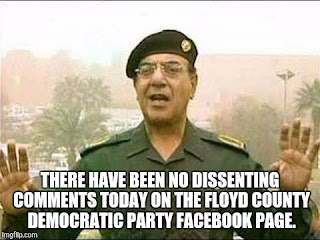 I can vote for Bernie Sanders, and I can vote for Elizabeth Warren. After that, it's all up in the air -- and Taibbi explains why.

... Along with an alarmingly high number of press figures, politicians like (Deval) Patrick seem to be trapped in an “electability” concept that hasn’t made sense since the Reagan-Bush years. Outside of a few spots on the Upper East Side and in Georgetown and L.A., the “center” has been gone a long time.

From Donald Trump to Sanders to Warren, the politicians attracting the biggest and most enthusiastic responses in recent years have run on furious, throw-the-bums-out themes, for the logical reason that bums by now clearly need throwing out.

America’s political establishment has created vast inequities not only in the economy, but in criminal justice (where street crime is heavily punished, but white collar crime is not), war (it’s mostly not the sons and daughters of politicians and CEOs getting killed in overseas conflicts), health care (where much of the population lives in fear that getting sick will trigger bankruptcy), debt forgiveness (Wall Street bailout recipients got to write off losses, but people suffering foreclosures and student loan defaults are ruined), and other arenas.

You can’t capture the widespread discontent over these issues if you’re running on a message that the donor class doesn’t deserve censure for helping create these messes. It’s worse if you actually worked — as Patrick did — for a company like Ameriquest, a poster child for the practices that caused the 2008 financial crisis: using aggressive and/or predatory tactics to push homeowners into new subprime mortgages or mortgage refis, fueling the disastrous financial bubble.