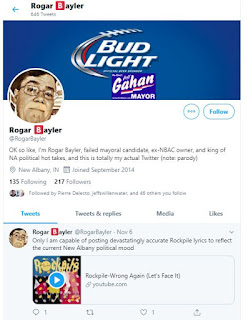 I don't know about you, but I think it's a noteworthy achievement to have merited an anonymous Twitter parody account ever since the autumn of 2014. After all, as so many of my (shall we say) "adversaries" no doubt would agree, I'm a complete nobody.

And by American standards of success and propriety, they're absolutely right. I'm neither an office holder nor a business owner, just a city resident, low-rung employee and taxpayer.

Not a single organization has appointed me as a board member, and I pay dues to no club of which I'm aware, although I did join AARP a few years back to begin accumulating senior discounts.

It's true that I write a bit about food and beer, and maintain a modest blogging presence.

Sadly, most of the people who "like" my parodist Rogar's tweets claim to have never read my blog, which is confusing, because how do they know which of Rogar's jokes to laugh at?

So, how many purely ordinary people in a city of New Albany's size can motivate someone to undertake a parody Twitter account? Not many. Apparently I'm indescribably special.

It's a very flattering thing, and I wish I knew who to thank, although as noted, my parodist is anonymous. He or she takes issue with my polemics (which go unread, remember?) pertaining to the Gahan administration, knowing where to aim barbs because I own all my words, and yet I know not where to return fire.

Of course I take a glance at Rogar from time to time, but I answer him/her quite seldom because it seems silly to try and converse with someone wearing a mask who hides behind a fence.

But just this once, I'll have a stab at it.

"Wild to think how I used to be a respected, relevant part of this community before I torpedoed my career and credibility for this moronic crusade that has consumed my life and accomplished nothing"

Assuming for the sake of the argument that Rogar is a Gahan supporter, no less an authority than the mayor himself discarded these very notions of respectability and relevance in 2015 when he observed that I'd never done anything positive for New Albany; it's a quote, on the public record, so don't go arguing with me.

Dear Leader said it, and now the words are gospel. I'd leave instructions to inscribe them on my tombstone -- "He Did Nothing Positive for his City" -- except I hope to be cremated and my ashes scattered over the Reisz Mahal.

Moreover, it's a low blow to accuse me of having a career in the first place, much less to torpedo it. Insofar as 25 years as a business owner were concerned, they were accidental, ad hoc and purely improvised from start to finish because I've always been a supremely reluctant capitalist. It never struck me as a career, just something I was doing until something else came along.

My departure from my former company had nothing to do with anything, apart from disengagement from a pursuit that had run its course. I was ballast, and I threw myself overboard.

Hardly. There are many ways to keep score, and votes are only one of them. The closest thing to "sacred" in my world is an obligation to hold accountable those seeking power, in DC or Eastridge Drive, by utilizing whatever tools the otherwise powerless find available to them: asking questions, conjuring polemics, asking questions, laughing out loud, asking questions, and hurling satire.

Did I mention asking questions?

Most of Gahan's supporters insist that Donald Trump isn't immune to these questions and snarkbergs. All I've done is remind the Gahanites that the practice of politics cuts both ways at all levels. Consequently what I've done has accomplished the bare minimum of what any of us should expect from a democratic form of government. It could have accomplished more, but it takes two to tango.

It seems to me he or she is the one being consumed, but no matter. Like I said, how many ordinary people merit a parody account on Twitter? Just think how much more savage and cutting the parody would be if the parodist actually read NA Confidential?

If the parodist actually read. Rogar's fevered election day utterances follow. Looks obsessive to me; then again, I'm nobody ... and enjoying every minute of it. 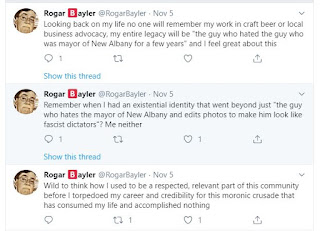 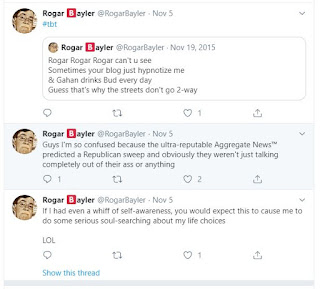 I'm going to assume they work in the City-County Building. I heard the working conditions there are inhumane so they may very well be suffering from zoochosis.