Gahan begins search for a disposable scapegoat as Indiana's Public Access Counselor finds the mayor in violation of the state's public records law. 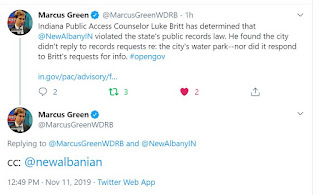 Thanks to WDRB's Marcus Green for tagging me at Twitter. Here's the link to Public Access Counselor Luke H. Britt's advisory opinion.

"This case involves a dispute over a municipality’s lack of responses to multiple public records requests." 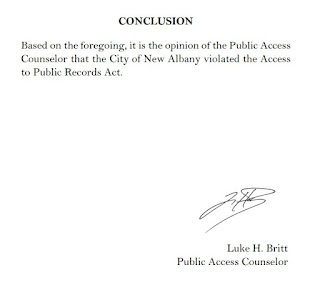 In the instance of Randy Smith's ignored request, these three posts are relevant background.

Reader writes about River Run: "I was under the impression public records HAD to be made public."

Team Gahan's failure to fulfill open records requests? That's Gahan's political conspiracy against transparency, and it's HIS problem, not anyone else's.

Britt informed Smith that his complaint was taken into consideration in formulating the advisory opinion.

I didn't realize the story had made it to the Associated Press. WDRB has it, dated November 4.

The News and Tribune reports the trio say their suit was filed in response to "a consistent pattern of failing to acknowledge, let alone respond, to a citizen's inquiry into the affairs of local government."