ON THE AVENUES: Rest in peace, Kevin Hammersmith. Eight years later, you're very much missed. 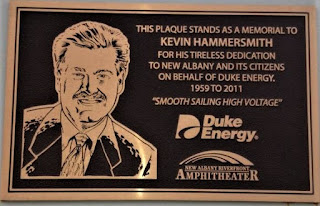 Eight years after I learned of Kevin's death by reading his sister Tamyra's post at Facebook (my phone began ringing off the hook shortly thereafter), I was reminded that it had, in fact, been eight years -- again it was his sister, and again the news came via Facebook.

The exact date always eludes me, perhaps purposefully, although each year since Kevin died the approach of Thanksgiving reminds me of what happened. These two events always will be linked. I try to push the sadness away and focus on the man's life.

Much has transpired during these eight years. The impaired driver who caused Kevin's death was sentenced in a plea deal, and to be honest I earnestly hope he's still in prison. My mother died, and so did Kevin's. Then the new Floyd County ballpark was named in his memory, and it's a fitting tribute, far more appropriate than a plaque or a statue.

The following was published in this space on November 23, 2011. 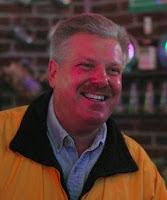 ON THE AVENUES: Rest in peace, Kevin.

Since early last Sunday morning, there has been one less set of very large footsteps in New Albany, because that’s when Kevin Hammersmith left us, far, far too soon.

It was dreary and damp outside in the following days, and while the rationalist in me knows there is no direct connection between meteorology and the death of one human among so many others on Earth, still the coincidence is one worth noting.

The songwriters and poets can conjure their imagery of tears falling like rain, but we essayists can only feel their sting.

Whenever a loved one’s life comes to an end, we invariably gather to find some way of quantifying the unquantifiable, and to make sense of the insensible. Every single time, we fail. The world is too huge, and we are too small. The eternity of deepest time inevitably mocks the diminutive human life span, and all one can do is to remember the fallen, and to keep on living, working, growing and pressing forward.

In early childhood, when our fathers (both now gone) worked together, Kevin and I were best friends. As so often happens, the dimensions of our friendship changed as we grew older, but no matter what else occurred, when we’d go months and sometimes years without seeing each other, we retained a bond of the sort that’s impossible to fathom unless so much formative time was spent together.

Those days of childhood were a cornucopia, so filled with the simple glories of post-war, small town Americana that it isn’t entirely clear to me whether we actually lived them ourselves, or watched them unfold weekly on the Andy Griffith Show. Probably the answer is elements of both, in equal measure.

On most Saturdays, we’d go to the Hammersmith home, or they’d come to ours, and apart from the joys of rampant playtime, the highlight of these relaxed evenings would occur after dessert, when our fathers (sometimes joined by Kevin’s doting Uncle Ed) would turn down the volume on the television and begin discussing the life and times of the little people – the working, blue-collar, middle class of which they counted themselves as long-suffering, dues-paying members.

Kevin surely would agree that these skull sessions of youth, sweet teas in hand, listening intently as our fathers surveyed Georgetown, America and the planet, were absolutely huge in shaping the dimensions of our subsequent lives. The Hammersmith side of the ongoing daddy debate tended toward a fiscally conservative, cautious, Republican approach, blessedly absent the social agenda of the contemporary era – although there was no love for long-haired hippies from either corner.

My father, while no liberal, harbored a subversive, populist streak that left him eternally suspicious of oligarchies and elites. If this bumper sticker would have existed in 1967, Roger G. Baylor may have considered sneaking in the dead of night to the Hammersmith residence and affixing it to Ken’s truck: “A working man voting for a Republican is like a chicken voting for Colonel Sanders.”

In turn, Ken would have mustered a vigorous riposte, probably like this: “So tell me, Baylor, who pays for it?”

Of course, sons are never precise clones of their fathers, and it’s safe to say that in terms of our respective personalities, Kevin and I carried forward modified aspects of these identities as we progressed through school, work and life. I always teased him for being clean-cut, corporate and all buttoned-down. He laughed and mused that if he waited long enough, I might yet grow up – and then what?

But even when we disagreed on matters like local politics and bridge tolls, the discussion remained sane and civil. There was mutual respect and considerable affection. As a close friend has accurately observed, it was difficult to dislike Kevin, even when you wanted to.

Assuredly we were different in many ways, but it strikes me that we were alike in harboring a desire to escape some conscious aspects of our upbringings, while at the same time remaining physically exactly where we were. Except for his years at Purdue, Kevin was a Floyd County lifer, just like me. I bummed my way through college, traveled, and always washed up here. He was a predictably fine student, had a wide choice of career options upon graduating, and chose the one that brought him back home, building his career right here, and effectively plugging one of the local brain drain’s rivulets. Apart from a gap or two, there we stayed, only a few miles apart, for more than fifty years.

Kevin’s philanthropic endeavors are the stuff of local legend, and they will be for years to come. It is my firm belief that in his eagerness to be of assistance to the community, he far transcended expectations in terms of his job, something which testifies eloquently to his bedrock sense of self, of purpose, and of social obligation in the noblest of old-fashioned applications. He did it because he meant it.

If any one person in this city deserves a statue, it’s Kevin, although he’d roll his eyes and squirm at the suggestion.

Any stranger can write an obituary, but eulogies are best reserved for those who actually knew the departed. In all such cases, remembrances are the exclusive domain of the living, as are funereal rites, observances of mourning, and the means we each employ to recover from our devastating loss.

We humans cannot ever truly fathom the inner workings of our own consciousness, much less begin to understand those of others. When the final bell tolls, each of us remains enigmatic in a unique, irreplaceable way, and Kevin’s no exception to the rule. I knew him, but I didn’t know him at all. No man is an island, and yet in some ways, we all are.

Had I ever thought to ask Kevin if he truly felt happiness in the life he chose to live, he undoubtedly would have grinned and answered yes, and there would have been no reason for me to think otherwise.

Now that he’s gone, what I wish I could have said to him is this: Kevin, I really, really hope that you were genuinely happy and felt personal fulfillment in your life. You spent so damned much of your time giving of yourself to others, and I hope you saved some of it for you.

November 7: ON THE AVENUES: Pay attention, students, because voter turnout went UP in New Albany.

October 31: ON THE AVENUES: In which Team Gahan's looming appointment with unemployment is examined.