A reader writes, we answer: "Roger, when you ran for mayor, didn't Extol Magazine have a profile about you?" 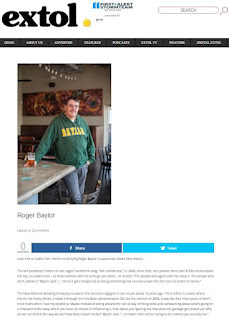 Frequent reader R writes: "Roger, when you ran for mayor, didn't Extol Magazine have a profile about you?"

R, you have a long memory, indeed. I'd completely forgotten about it. The story was in one of the 2015 editions, early in the magazine's existence,, and I believe Angie Fenton wrote it.

Fortunately the page in question can still be viewed on-line: Roger Baylor

Love him or loathe him, there’s no denying Roger Baylor is passionate about New Albany ...

... While he’ll always be revered as a veteran zythologist (the man knows beer), he’s now known for speaking up about what’s occurring in the New Albany – often and loudly – and unapologetically sharing his perspective, even if that means taking to his blog to skewer those involved.

Baylor also has taken plenty of heat himself. “I have people who call me all kinds of non-flattering names, but I would hope that right or wrong, I throw punches, I get knocked down, I get back up and I keep throwing punches. … I hope that somebody would say, ‘He does a good job of standing up for what he believes,’ even if they didn’t agree.”