Thanks for reading NA Confidential, where we enjoy reconnoitering the neglected periphery for uniquely local perspectives on life in New Albany. Otherwise your only choice would be the Jeffersonville News and Evangelbune, and that's a fate almost as unrewarding as light beer.

Year in and year out, business is slower in August, so we'll restrict the survey to the top ten alone in ascending order, sans honorable mentions.


To park or not to park? Conflicting signage is the question. 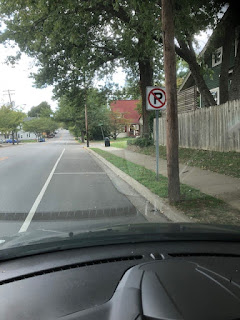 
Remembering Matt Brewer, bidding Williams Plumbing an affectionate farewell and beseeching City Hall to give a damn about public safety.


In fact these commercial vehicles have blocked sight lines at this corner since 1987, when Williams Plumbing bought the building and converted it to what amounts to an industrial use, which in practice has meant neglecting it consistently into a neighborhood eyesore.


ON THE AVENUES: The whys and wherefores can drive a man to drink; our lives just ARE, and that's that.


Birthdays get piled into desk drawers alongside rusty paper clips, obsolete business cards and bits of senseless plastic that somehow have evaded landing in the ocean. It would be pleasant bonus if the annual birthday observance yielded something genuinely revelatory; to paraphrase Michael McDonald, we'd trade it all right now for just one minute of real insight.

Beats me. I'm just a bozo on this bus, and perfectly content to watch from one side of the bar or the other for so long as Dear Leader rises from bed to flip the switch that makes the sun rise each morning, because the open air museum never looks more fetching than by dawn's early light.


Learning nothing from the the Ohio River Bridges Project, INDOT bureaucrats refuse to conduct a formal economic impact study in the run up to Sherman Minton project work.


Well then, screw the state's project team. Join me in wondering how many of them have any experience owning indie businesses. As with Gahan's crack team of paper-shufflers, assuredly none do.


The Fork (and Cheese) in the Road has not been seen because Jeff Gahan is holding it hostage until someone gives him more campaign finance gravy.


Many people have asked what became of Fork in the Road, the sculpture removed by Gahan's mercenary thugs in the run-up to unnecessary Market Street beautification.

The city has not commented on the whereabouts of the Fork (and cheese) in the Road. What we'll get instead of a unique, iconic locally produced sculpture is an HWC IKEA ceremonial gate that looks like every other such Disney-fried atrocity in every other place where money-grubbing politicians farm art to aesthetic assassins -- like HWC.


Gahan commits violence against our most vulnerable because our most beautiful can't get enough of "sanitary conditions."


"We were out of town when Mayor Gahan lied to and then destroyed a community of homeless people here in New Albany. His personal actions and the usual lack of substantive response from other Democratic officials are deplorable but not at all surprising given their consistent track records of subsidizing the wealthy while seeking to limit or penalize nearly everyone else."


Hull & High Water announcement: "On top of our seafood menu, we have now decided to launch a full Southern BBQ program."


"We have decided to change a few things here at Hull to add a more diverse dining experience with added catering options as well. You could only keep me away from southern cuisine for so long. On top of our seafood menu, we have now decided to launch a full Southern BBQ program. We miss the likes of Feast BBQ and Shawn's Southern BBQ downtown and would like to fill that hole with much due respect."


Last week all traces of El Rico Taco disappeared from Destinations Booksellers (604 E. Spring St.), and that's too bad. They were friendly people and their food was quite good. I'll remember those tamales for a long while.

It's worth remembering that even in such a restaurant incubator setting, eatery owners need operating capital to get through the first six months to a year. Goodbye, El Rico Taco. It seems we hardly knew ye.


LIVE TO EAT: This commentary is a postscript to the Mirin New Albany closing.


Would the advent of the Reisz Mahal have helped pull Mirin New Albany through the doldrums? Maybe, except I'm having trouble imagining the aesthetic assassins who populate Gahan's regime finding comfort in sophisticated Asian noodles. Gahan's more the Bud Light and White Castle ramen sort, and his minions shamelessly pander to his stunted tastes in an effort to avoid 2:00 a.m. phone calls.


Mirin's second location in New Albany has closed, according to its owner.


Mirin New Albany, the second location of Griffin Paulin's eatery in Louisville, has closed. The story broke at Food & Dining Magazine.
Posted by The New Albanian at 9/02/2019 09:12:00 PM