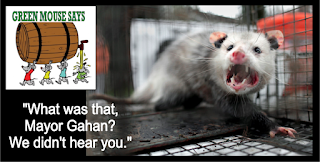 I didn't attend the League of Women Voters' fix-is-in-non-debate, and here's why.


But the Green Mouse did.

"The only moment of nastiness last night was when Mark Seabrook answered a question about city finances and then passed the mic to Jeff Gahan to answer the same question. Gahan asked the moderator to repeat the question and while she was looking for the card he lashed out at Seabrook.

"Unsurprisingly, the moderators did not say anything about his outburst.

"Gahan raised his voice and made this petulant snarl about how his balance was perfectly budgeted and the city's finances were in great shape. He yelled at Seabrook and said 'you're one to talk' since he's never had a balanced budget, and some other inaudible crackling.

"Slick Jeffie did a great job of showing his true colors. Seabrook definitely got under his skin last night."

Just imagine if Hanson and the League of Women Voters had the chutzpah to stage an actual debate.
Posted by The New Albanian at 9/13/2019 08:44:00 AM