Vote your conscience for New Albany City Clerk, as both candidates are excellent. 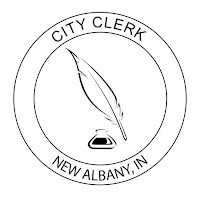 To be perfectly honest, I've agonized over the question of an endorsement for the city clerk's race.

The incumbent Vicki Glotzbach (D) has been unfailingly courteous and professional since she became city clerk in 2012. Prior to her two terms in office, she was a deputy city clerk. Obviously experience favors her.

However I greatly admire challenger Kelly Feiock (R) for her relentlessly fact-based involvement with the Mt. Tabor Road Project resistance movement. It's very important for all seats to be contested, and she's a powerhouse activist and a solid candidate -- and the only candidate to whom I've personally donated.

At the grassroots level, I tend to believe two terms in office are enough. Then again, the office of city clerk has yet to be overtly politicized.

The major imperative in this year's municipal election is to drive a garlic-lubed stake through the heart of the Democratic Party's pay-to-play political patronage machine, but I can't make the case that the city clerk's race is central to this civic necessity.

So there. I'm stymied. Glotzbach or Feiock; vote your conscience, and I'll vote mine.