Your PourGate update for Tuesday, September 3, and a letter to the editor. 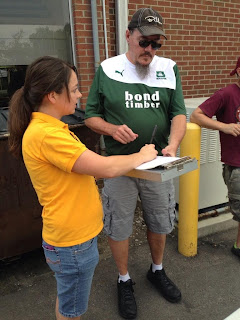 NABC's dispute with the Floyd County Health Department remains in a Cold War phase, and that's about all there is to say. We will continue to pursue remedies.


As for the letter below, I submitted it to the newspaper two weeks ago and have since grown weary of the draft residing at the top of the blog's queue. I'll link to the eventual placemarker in Hansonville when it finally appears -- but be sure to turn off your laptop's sound, lest you hear the dentist explain yet again her commitment to healthy teeth.

To the editor of the News and Tribune:

Van Hoy jeers the Floyd County Health Department (FCHD) “for its petty posting of a photo on its website taken in front of a local business.”

Unfortunately, petty is the least of it.

The photo, now finally removed, is defamatory and retaliatory. It testifies eloquently to a hubris-laden institutional culture in desperate need of instruction as to the etiquette suitable for taxpayer-supported government actors.

The source of my company’s current imbroglio with the FCHD is its misstep in seeking to require temporary food serving permits for beer pouring events. Moreover, it’s about the proper regulatory jurisdiction of the FCHD in relation to the Indiana Alcohol and Tobacco Commission (ATC).

Van Hoy writes, “The legality of such permitting can — and has — been debated,” and while this is true, readers may not be aware of the extent to which the FCHD’s legless argument has been demolished.

The crux is this: Who regulates NABC when it comes to pouring beer at temporary events, such as this summer’s excellent Bicentennial Park concert series?

The FCHD’s answer comes from thin air: Ignore both statute and precedent, wave a magic administrative wand, and declare without warning that henceforth, beer is food. Actually, no other county health department in Indiana currently is making this spurious claim.

That’s because seventy-plus years of Indiana regulatory history and all prevailing precedents indicate otherwise. As beer dispenser, NABC is governed solely by the ATC, and in the course of appealing the FCHD’s over-reach, we managed something the health department could not: We produced a court ruling clearly affirming our position.

In Fort Wayne v Kotsopolous (1998), the Indiana Court of Appeals clearly and succinctly confirms the ATC’s regulatory pre-eminence in Indiana. In short, NABC’s supplemental catering authority, as licensed annually by the ATC, is all we need to temporarily pour beer at Bicentennial Park or elsewhere – provided, of course, that we abide by the ATC’s guidelines … and we do.

The FCHD has absolutely no part in this permit process, and its attempted justifications to date have been arrogant, irrelevant and tortuous, reminding me of the way “The Economist” magazine once described a speech by the former British prime minister, Harold Wilson:

“It contained difficult passages in which it is impossible to disentangle what the words really meant to him from what they were intended to mean to others and what they might later be said to have meant at the time.”

Whether inventing baseless regulations or posting actionable photos, is this really the way we want county government to operate?
Posted by The New Albanian at 9/03/2013 07:14:00 AM