You're right, Bill. The street should be two-ways, and then -- voila, no problem! 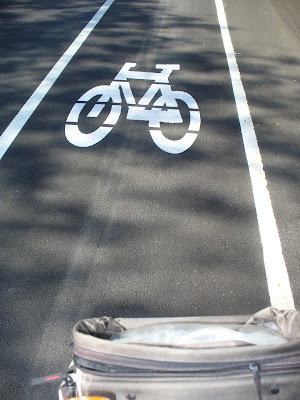 How is it the city's fault that bicycles travel the wrong way on a one-way street? Doesn't this factoid reference personal responsibility?

Tribune reader Bill Smith (see below) is vexed, but in truth, the Interstate highway system itself is elaborately marked, and still, occasionally, it is the scene of a "horrible accident" when a fallible human drives the wrong way.

There's no doubt here that following the paving job on Spring Street, it took far too long to provide adequate stripings, altogether. As far as the bike lanes go, at least they're finally now marked with the bike symbol (above, photographed frome the saddle) that illustrates the correct way to go, and yes, absolutely, there are far too many people riding bicycles in this town who know nothing -- zilch, zero, nada -- about the rules of engagement.

However, by reader Smith's reasoning, we'd have to shut down automotive traffic as well, because as a daily commuting cyclist, I guarantee that just as few drivers of cars as riders of bikes understand the rules of engagement -- with other drivers, much less cyclists.

It'd be nice to think that some governmental entity, whether it be the city or state, might have the time and money to help educate drivers and cyclists alike, but this isn't likely to happen in my lifetime. I'm open to suggestions, Bill.

New Albany bike lanes on Spring could cause accidents

The bicycle lanes on Spring Street between Vincennes and Bank have the potential for horrible accidents. I recently encountered a bicyclist going east, or the wrong way, in the bicycle lane on the south side of the street. Indiana law requires bicyclists on public streets to obey the same rules of the road that motor vehicles are required to obey. Is it legal for bicyclists to go the wrong way on one-way streets? Further, are drivers who are entering Spring Street from side streets on the south side of Spring looking for bicyclists coming from the wrong direction?

It does not look to me that this matter was thoroughly researched. It does not make sense that bicycles and cars should be going in the opposite directions on a one-way street. Further, the striping job on Spring Street was a sloppy job. I am surprised it passed the specifications. Who approved this work?

I've seen this too. The solution is a little education, and maybe painting arrows near the bike stencils pointing the correct way.

They rode down Spring the wrong way before the lanes, too. The lanes are a step toward a solution, not the source of the problem.

Bill Smith is my pen name...muhahaha...
He does have a point about the bike lanes being confusing, however, as was said, no matter what the rule someone will always break it.

Edited at 13.35 to show the new markings. Photograph by me.

I think most of this will subside with use experience. The new traffic pattern was a little confusing to people, but now they seem to get it. We're not used to bike lanes.

Same confusion when they opened the library (joke).

Maybe if our newspaper hadn't suggested riding up one side, turning around and then riding back the other...

You caught that in the article about the budget shortfall?