In spite of the neglect of its owner, the Daisy Medical Supply building may survive.

NA Confidential has learned that the Daisy Medical Building at 117 E. Oak Street, which has been threatened with demolition owing to the partial collapse of building’s west side, may have been saved from the wrecker’s ball with the help of Develop New Albany. 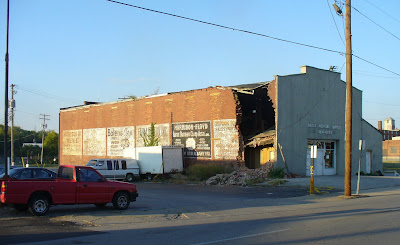 We’re told that Tom Johnson, masonry restoration contractor and owner of Keystone Restorations, has completed a deal to purchase the building after Develop New Albany made a grant of $5,000 to help Johnson meet the asking price of the building’s owner, a Mr. Stewart, whose persistent and disgraceful neglect of the 1840’s railroad structure brought it to within weeks of being torn down by the city. 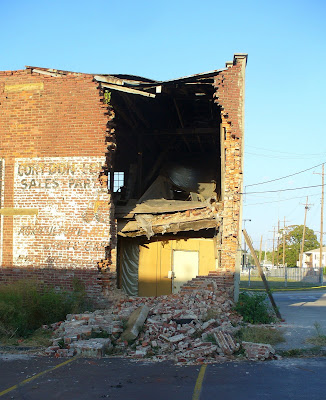 While it continues to strike NA Confidential as odd that people like this Stewart fellow should be rewarded with cash for what amounts to serial anti-social behavior against the city at large – the lash, public stocks or stringent financial penalties all seem more appropriate – it remains that an agreement to sell has been struck, an agreement in principle has been inked by both parties, and work apparently will soon begin on stabilization.

“This will be extremely dangerous and risky work that few would attempt,” said an insider, “but Tom has a remarkable track record and feels confident that he can accomplish it.”
Posted by The New Albanian at 9/25/2007 12:04:00 AM

Good news another old industrial building will be saved. I've been watching those bricks fall for a while and it was sad to see for sure. good bricks I bet. Hope he saves the ghost signs too.

There were some good people working on this behind the scenes to get the building into the right hands. Thanks to them all.

I'm sure many people will shake their heads and ask, "why should such a building be worth saving"?
The short answer is because it is a link to our past which can be saved and it's in a great location that can benefit the downtown's future. Assuming Tom Johnson's triage works, it will amaze people that a structure so criminally neglected can be revived.

It could be so many neat things such as a brewery/restaurant. Perhaps someone with such a background could be located and enticed into the water.

As important as historic preservation is from a cultural standpoint, it'll be a great day when people who complain about paying high energy prices finally begin to realize how our Vegas-style build mentality helps directly lead to those prices.

Saving the building is good for our community, our economy, and our environment.

That Tom and his wife Lisa have chosen to take on a substantial challenge makes them local champions. That so many rallied around them means we're getting closer to a healthy community.

One of the more important factors that contribute to community health is the ability of neighbors to successfully deal with the issues and challenges facing their neighborhoods. Saving the Daisy Medical building and warding off McCartin's destructive tendencies in one week is strong evidence of that.

As Annie mentioned, there are some darn good people working hereabouts and making a difference.