In a manner of speaking ... from the front porch ... next Saturday.

Yes, it's that time again. 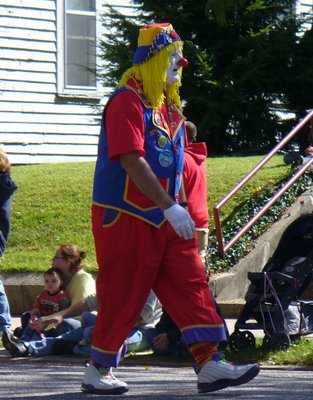 In the fall of 2006, we removed the ancient draft beer box beneath the bar at the Public House and installed a new one.

The old one, which had been in place since 1992, was still functional, but because of corrosion and leakage, it became impossible to use indoors. Our worker at the time built two sets of casters and rolled it out the back door, where it remained parked, fully exposed to the weather and scrap metal thieves, throughout the winter and into 2007.

That is, until a month ago, when I paid my itinerant handyman an unspecified sum to move the keg box to my garage for the ostensible aim of rehabbing it in preparation for the annual NA Confidential Harvest Homecoming Parade Party at my home.

Life promptly intruded, and just yesterday I finally remembered to plug in the venerable appliance and see if it actually still worked. I’m delighted to report that she’s cooling as I write. All that's needed is a good scrubbing.

Saturday, October 6 is the date for this year’s HHPP at the residence of Mr. and Mrs. Confidential. If you know us well enough to know where we live, and if you’re not embarrassed at the prospect of being spotted drinking beer on the porch with me, you’re a default invitee.

Festivities will start circa 10:00 a.m. with the institution of cigars, White Castles (jalapeno cheese) and espresso as we watch the city workers prepare the parade route. The taps will be open during this time, as it is well known that somewhere in the world, it’s after 12 noon.

This year’s draft beer selection will be NABC Bob’s Old 15-B (porter); Bluegrass Brewing Company (Main & Clay) Oktoberfest, and our traditional Poperings Hommel Ale from Belgium. A fourth surprise may be on tap if it arrives in time.

Please bring a beer snack. There will be a main course of yet to be determined food, likely a pot of vegetarian chili, and day-long grazing. Anything that goes well with beer is eligible.

If you’re in the parade itself, stop by for adult refreshments afterward. There’ll be bottles of Sprecher sodas for non-alcoholic thirst quenching.

As a final note, please contribute your suggestion for the wording on our banner this year.

The best suggestion yet was inspired by last year’s plan (sadly, we didn’t follow through) to actually have a “stealth” float in the parade, seemingly innocuous, but at the last moment (a la “Animal House”) to reveal that we’ve all dressed in women’s clothes, with the theme being: “NA Confidential: DRAGGING New Albany into the 21st century.”

Ah … what might have been … but perhaps a banner denouncing our do-nothing councilman would be enough. Let me know.

And, come by for a beer next Saturday.

OH MY GAWD!!! HOW HORRID!
(okay, so I suffer from nearly paralyzing case of clownaphobia)

Regress: It's the High Cost of Low PRICE