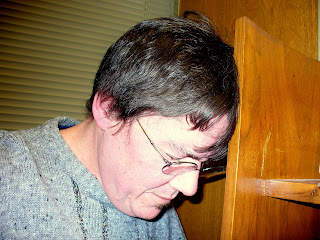 Know that for all the hullabaloo, absolutely no progress was made on the firefighter hiring ordinance, discussion of which began about the time that President Shrub declared victory in Iraq, and much to the delight of unreconstructed 6th district Republican council hopeful Dick Stewart, who entertained the capacity crowd by performing minstrelsy in blackface.

Chairman Kochert's landmark anti-smoking legislation, which is intended by its author to salvage an underachieving political career by means of a bold progressive stroke, was unceremoniously tabled for further research. As noted previously, it will be coming back to divide the community numerous times before being enacted and failing for lack of enforcement revenue.

Even the no-brainer unsafe building fund revamp was delayed owing to a general inability to agree on the meaning of "lien" and its application to vacant lots.

However, the initial zoning adjustments required for the Summit Springs development project off State Street were approved, with 1st district CM Dan Coffey -- formerly an intractable foe of any such plan -- leading the charge in favor and demanding that we do a better job of attracting development to the city.

We'll link here Tuesday to coverage in the newspapers, and perhaps be back for more analysis following a night's rest. Don't forget NAC's meet 'n' greet Tuesday night at La Rosita Grill in New Albany ... and so, to bed.

Being somewhat new at more closely watching the local political scene, the following comment may be off base. I realize that but put it out anyway.

It seems that the council thinks by putting off addressing the issues, the people will go away and make it easier for the council to "hide" their decisions. This may have worked in the past. After attending my first council meeting last night(no, I did not stay until the end), they appear to have not realized that this is changing.

The council room was filled to capacity by 7:00 for a 7:30 start. The crowd spilled out into the hallway with just as many people outside the room straining to hear.

I realize that there were several hot issues last night that swelled the ranks. As the NA has pointed out, one of these issues has been put off for quite some time. Did the council notice that the people did not go away? Apparently not yet. If they do not soon recognize this, some members of the council may the ones that go away.

One can always hope.

I agree with iamhoosier, I think part of the problem we have is that most of the city council was elected by voters age 60-80, and these are the people who are quite vocal about wanting no new development anywhere near them. Until the younger voters stand up and vote these people out of office things will probably remain the way they are. I'm not saying all the city council members need to go, but quite a few have been there far too long.

Thanks for the update Roger, our sympathy goes out to you for having to set through buisness as usual at the City Council.

This statement may sound a little silly to some of you but, I don’t think this council puts things off intentionally. My case in point; the fire dept. ordinance is discussed intently by everyone in the know except the fire chief who was intentionally left out of the meeting by the council. The chief and council cannot discuss this matter even in public without name calling and rock throwing. The most of which councilman Kochert catches square between the eyes. The councilman who sponsors and co-authors the bill doesn’t even vote for it. Mrs. Crump who is one of four on the FD committee doesn’t even know who is on the committee. The ordinance is so poorly written Zurschsmied doesn’t believe it to be definable or enforceable. Sill more council members voted for it than against it. The Mayor calls it a good ordinance, though it has more holes in it than a slice of Swiss cheese. The chief however admits that it is just better than what we have now.

In regards to the smoking ban, once again the council member that sponsors the ordinance to council states she will vote against it as it reads. She motions to table the issue and create another committee.

On a lighter note, as much fun as it is to watch the Mayor and Kochert spar and to see Chief Toran and Blevens tongue whip each other, I have an idea. Let’s get the Rock’em Sock’em Robots and have a boxing night, Kochert vs. Garner and Toran vs. Blevens. The way these four go at it I am sure there would be a winner take all grudge match for the main event. We could charge admission to a smoking room, sell pints and have Para mutual betting. Proceeds will go to pay for ambulance runs of the underprivileged that can’t pay their bill.

Coop,
Good point. Perhaps it is a subconcious way of hiding.

We need max 5 council members, not 8. Things would move a little faster then. What happened to the redistricting law-suit? Will anything be resolved before this next election?

Can anyone explain how two council members abstained on the firefighter vote? Is there a conflict of interest that I am not aware of?

You are BOTH right!
Right on the nose, with no conflict between either of your assessments.