I may need your help with research into Jeff Gahan's Money Machine. 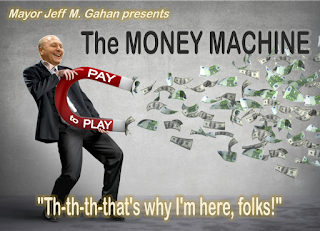 Whenever Jeff Gahan points to all the wonderful things he's done with your grandchildren's money, he's concealing his pay-to-play underbelly. For the past eight years (and counting), a constant flow of cash has come into his campaign finance account from PACS, lawyers, vendors, corporations, attorneys, vested interests and contract-seekers.

Quite a few of them live or work beyond New Albany city limits. Inside the city, one or two donors might actually have tithed without expecting a favor in return.

Many of you will say this is fine and dandy, because everyone does it, and anyway, it's better than if the OTHER side did it.

I say what's corrupt is corrupt, irrespective of the political party or easy excuse. Cancer doesn't care if you're a Democrat or a Republican, and the visible portion of Gahan's lucre as diligently reported to the state surely conceals the larger submerged geography of the iceberg.

What's more, it's not all cash money, is it?

Think about the off-the-record favors. Remember David Duggins' famous limo junket to Keeneland, which was financed by the same company that received the sweetheart deal to construct the Reisz Mahal?

By the end of this week, I'll have concluded the first step in building a data base of Gahan's donations since 2011 (through 2018). I've been recording names and companies, and will have a cumulative total of officially reported contributions.

At some point soon, I may need help. If you've done this sort of thing before, perhaps you can steer me to the best format for the results. I can only barely navigate Excel, for instance.

More importantly, I'll be needing assistance in tracing the self-interested donors to the contracts they received and the benefits they accrued. Some are easy; persons connected with HWC Engineering have donated tens of thousands to Gahan's war chest, and the work they've done for the city in recent years is fairly well documented.

But when you see dozens of Indianapolis lawyers tossing dollar amounts both great and small, it can be laborious to untangle the thread, especially five or six years down the road.

Folks, we need to be clear that the News & Tribune doesn't give a tinker's damn about any of this. Tom May's twice weekly columns can't help us in this effort. When the data base is complete and includes expenditures, we'll see another iceberg tip: Gahan campaign newspaper advertising purchases. What we won't see are the daily ad purchases made by the city with tax dollars, ostensibly to tout the city, but as we know all too well, functioning as de facto year-round re-election touts.

So, I may be asking you for help. Gahan has assembled a formidable propaganda outreach alongside his pay-to-play patronage colossus. But as Achilles learned, there's always a point of vulnerability. The bigger and more arrogant they are, the harder they hit the pavement.

In closing, know that the effort is not without humor. From 2011 through 2015, the law office of former city attorney Stan Robison made roughly a half-dozen donations to Gahan's re-election campaign totaling a bit less than $7,000.

Not once did the mayor's treasurer learn how to spell Stan's name correctly.