“To say that Lyndon (LaRouche) was slightly paranoid would be like saying the Titanic had a bit of a leak.” 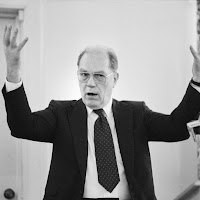 The conclusion is inevitable.

Originating on the far left, in the Trotskyist Socialist Workers Party, LaRouche would eventually forge what is easily the strangest path from left to right in twentieth-century America. His cult, forged in street fights with the Communist Party in the late 1960s, now spends most of its time propagandizing on behalf of both Donald Trump and China’s Belt and Road Initiative. In between, LaRouche was, at various points, a drug warrior, a Reaganite “Star Wars” backer, a dedicated foe of figures from Queen Elizabeth (“a genocidal drug runner”) to Walter Mondale, a federal prisoner, an advocate for Glass-Steagall, and, of course, a psychoanalyst. Only in America!

Let's not forget the pivotal role of British intelligence.

By the mid 1980s, LaRouche had established a formidable international presence as well, with numerous supporters in West Germany and Italy. In the latter country, his followers managed to advance a particular hobby horse of his, the proper tuning of musical instruments, into debate in the parliament. LaRouche had long been concerned with the effects of music on psychology, writing in 1980 that “Rock was not an accidental thing. This was done by people who set out in a deliberate way to subvert the United States. It was done by British intelligence,” and that the Beatles were “a product shaped according to British Psychological Warfare Division specifications.” The brainwashing of John, Paul, and company could be resisted, however, through proper tuning. (LaRouche and his followers favored A4 tuned to 432 Hz). The legislation in Italy failed, but not before attracting the support of figures including Plácido Domingo and Luciano Pavarotti.

Things were looking good for LaRouche until 1986, when the federal government launched a series of cases against his organization that eventually resulted in prison time for the cult leader and several of his associates. The case, which was led by none other than a federal prosecutor named Robert Mueller, revolved around various sorts of fraud, from unlicensed credit card transactions to soliciting loans from his followers. LaRouche, of course, saw the mark of conspiracy on his prosecution, alleging that everyone from the KGB to Oliver North was behind his incarceration. While in prison, he shared a cell with disgraced televangelist Jim Bakker, who later wrote of LaRouche that “To say that Lyndon was slightly paranoid would be like saying the Titanic had a bit of a leak.” (Bakker was, however, impressed by his cellmate’s knowledge of the Bible).

That's right. LaRouche shared a jail cell with Jim Bakker. We'll see you on the dark side of the moon.

In his nineties at this point, his writings became ever more untethered. Embracing the digital age despite his senescence, LaRouche began conducting a number of fireside chats via YouTube, from which he would dispense wisdom such as the following:

A few years ago, some defectors from the cult released a series of internal minutes, which were full of bizarre challenges LaRouche issued to his followers, such as, “Prove to me that Ireland’s going to continue to exist — {then} we’ll discuss Ireland, if you can give a plausible case for its existence!”

His group, meanwhile, continued its bizarrely confrontational antics which had marked it since the 1970s, with one particularly memorable example taking place at a New York Barnes & Noble a few years ago, when a few LaRouchies confronted chess champion Garry Kasparov as a NATO pawn, and assailed him with “Sieg Heils” and “Heil Hitlers” before a crowd of bewildered Manhattanites.

As the last few years have reminded us forcefully, the pathologies of American society and politics will continue to throw up cranks like LaRouche, even if he reached heights few others could attain. Looking at the America of 2019, it seems LaRouche may have been closer to the mainsprings of American politics than we would like to imagine.