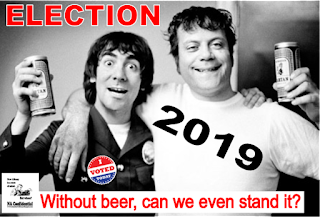 Primary election slates are now filled, with piquant blog commentary to come. As a reminder, independent candidates are not required to use the same timetable as those filing for a party primary. 6th district incumbent *Scott Blair is the most prominent independent example; he'll register later in the process. So will I.

There are some intriguing matchups in the upcoming May 7 Primary. Friday was the final day to file candidacy papers.

Municipalities across Southern Indiana offer voters plenty of choices in some key races. Two incumbent mayors will face opposition in May.

Charlestown Mayor Bob Hall will face David Abbott in the Republican Primary. The winner will go up against Treva Hodge in the November General election.

New Albany's Democratic primary for mayor is a rematch of the 2015 race, which paired incumbent Jeff Gahan against David White. Gahan won that matchup by 699 votes. Democrat voters will once again have a choice between Gahan and White in May. Gahan is seeking a third term as mayor.

New Albany voters will also have choices for city council. Five Democrats are seeking at-large seats and only three will move on to the General Election. Four of the candidates, Jason Applegate, Sam Charbonneau, Maury Goldberg and Christopher FitzGerald came up short last year in county-wide races. They will be joined on the ballot by Christina Estill. The three winners will face the three Republican incumbents, David Aebersold, David Barksdale and Al Knable in November.

All city council incumbents are seeking re-election except Dan Coffey in District 1. He is planning on running for mayor as an independent.

City Council President Scott Blair will also seek a third term as an independent in District 6.

Republican Chairman Shawn Carruthers is also confident with his slate of candidates, which includes three council incumbents, new faces running in other council races, and Mark Seabrook, who wants to be the next mayor.

"We have a diverse group of people who are talented in all aspects of industry," Carruthers said.