LIVE TO EAT: "In our era of hyper-credentialism, there’s almost no sphere of connoisseurship without a knowledgeable, certified taste expert." 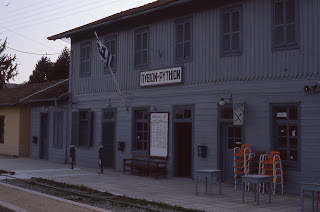 This is a long read and a very good one.

Honey, cider, chocolate, cheese ... beer, wine, spirits ... I'm simpatico when it comes to expertise, with nothing bad to say about any of this. All hail knowledge, and let's all possess a certificate.

However we mustn't forget the power of stories that connect these wonderful food and beverages to the real world. Ultimately this planet is situational; the best experiences aren't always capable of being explained.

The time I dined on a baguette and goat cheese sandwich with a cool bottle of lager plucked from a buffet at the rural connecting station at a village near Pythion in Greece, consumed while seated on a lovely old school wooden bench with a great view of the sidings and rusty idle freight cars, might have been the best lunch ever. After all I can still remember it more than three decades later.

Let's not eliminate subjective joy through purportedly objective quantification. There a place for expertise, but at certain junctures it's nice just to let yourself go.


The Sommeliers of Everything, by Jason Wilson (Washington Post)

... After lunch, there is a tour of Murray’s caves, where the cheese ages. Then we’re led through the tasting of eight more cheeses by Tyler Frankenberg, the company’s customer experience manager, also a Certified Cheese Professional. This tasting is about comparing variations in cheesemaking: the differences between cheese near the rind vs. the tip, washed rind vs. ash, unaged vs. aged (“older doesn’t necessarily mean better,” we’re told). At one point we compare two versions of a funky pasteurized sheep’s milk cheese called Hollander with an aroma that people describe as earthy, mineral, “like mom’s basement” and even redolent of ammonia. “With this one, the bark is worse than its bite,” Frankenberg says.

“It smells like a sweaty sock,” says one student.

“Well,” Frankenberg says, “as we get deeper into this, we have to differentiate funk. There’s a difference between a freshly sweaty sock and this, which is an old sock you’d find under the bed a week later.”

As the class chuckles over that distinction, Frankenberg reminds us: “Remember, taste is always subjective. No matter if a professional tells you, ‘This tastes like wet slate from the Loire Valley.’ ” I’ve heard the same sentiment expressed by almost every taste expert I’ve visited. And yet, every one of these experts has a vested interest in taste being way more codified than subjective.

Indeed, what the rise of specialized taste education, the cult of sensory analysis, and the wine-ification of everything means is that taste is becoming more and more codified all the time. There are good tastes and bad tastes; not only that, there’s a growing caste of gatekeepers in every field who are keeping score on what tastes great, middling and flawed. Maybe this is what morality or philosophy looks like in an increasingly post-religious, post-intellectual, materialistic United States. We are a people in need of an authority, a higher voice, some guidance — even if it comes from behind the cheese counter. Maybe, for many affluent Americans, the sommeliers of everything represent something shaman-like. Listen to me. I am your one true sommelier.