Whither Sister Hicks and the Christ Gospel Church? 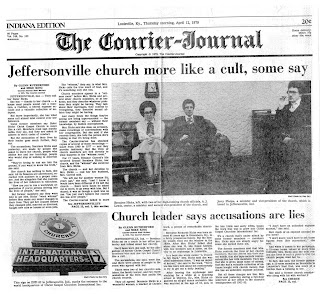 Interestingly, the book Christ Gospel Church and Sister Hicks Revealed: A Critique of the Bride's Message, which is mentioned at the web site (below), was published only three months ago.

In turn, these critiques remain topical after 37 years. According to the math in the newspaper article from 1979, Sister Hicks now is somewhere around the age of 97.

Has her Main Street domicile ever been included on the Historic Home Tour?

This site was created for those who wish to know of or have ever been associated with Christ Gospel Church and Sister Hicks and provide them an in-depth review of her doctrinal teachings, specifically her own fabrication of the Bride's doctrine. In it, we will layout a clear and fair judgment of Hicks and her teachings. Bernice Hicks, better known as Sister Hicks, makes prolific claims for herself and the "message" she espouses. That message is called the "Bride's message." Hicks claims that God personally gave her this teaching. When Hicks states that Jesus Christ speaks to her, she does not mean it as most would say, allegorically, but as in the flesh. By analyzing her claims and weighing her teachings against the writings of the apostles this site will attempt to show that Hicks' doctrine has no support from the scriptures and should be considered an inferred fabrication. Her persistence to falsely proclaim and uphold a special prophet status with her congregation would eventually be her undoing.