If Dan Canon is railing against the Republican mayor in Charlestown over housing issues for the working poor, but not the Democratic mayor in New Albany, there's a big problem.

I thought it was clear where matters stood, and then it wasn't. Something changed for me in September, 2017.

That's when my preferred 9th district congressional aspirant Dan Canon came down fast, forcefully (and correctly) on Mayor Bob Hall of Charlestown, who happens to be a Republican. Canon's rhetoric was blazing as he considered the implications of Hall's Pleasant Ridge cleansing fiasco. 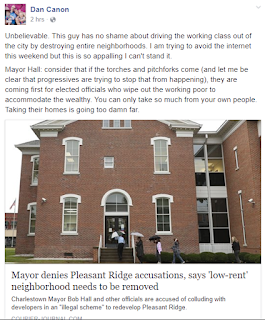 Unbelievable. This guy has no shame about driving the working class out of the city by destroying entire neighborhoods. I am trying to avoid the internet this weekend but this is so appalling I can't stand it.

Mayor Hall: consider that if the torches and pitchforks come (and let me be clear that progressives are trying to stop that from happening), they are coming first for elected officials who wipe out the working poor to accommodate the wealthy. You can only take so much from your own people. Taking their homes is going too damn far.


At the time I was inspired, because everything Canon wrote about the situation at Pleasant Ridge applied just as accurately to Mayor Jeff Gahan's forcible seizure of the New Albany Housing Authority -- and still does, even more so in the wake of David Duggins' recent termination-worthy intimidation tactics.

As I thought in September, surely candidate Canon was ready to apply the same logic to Gahan's putsch, and to lead. As we all know by now, this hasn't happened.

First, a look at Canon's response to the issue during his recent town hall meeting in New Albany, as reported by the newspaper. Then, a few thoughts.

... The public housing situation in New Albany drew at least two Southern Indiana residents to the town hall. Aaron Fairbanks, a volunteer who has canvassed for Canon, attended because he says he believes in Canon but needs to know where he stands on housing.

“There’s definitely an issue with [public housing] in New Albany … With government cooperation, [the government] has the ability to reduce homelessness so that’s an issue I’m incredibly interested in — fair and affordable housing. I want to get a more concrete idea of where he sits on that,” Fairbanks said.

The issue, Fairbanks said, is the plan to demolish some of the public housing units with no concrete plan to replace those units.

“Having lived in public housing before, it is a bit personal,” he said. He knows that all the blame can't be placed on the local government, but coming up with solutions, and dollars, at the federal level to put into public housing would be a good place to start.

“Basically without knowing exactly where Dan [Canon] sits, I don’t know know if he would be for a remedy that would bolster public housing stock, and that’s what I’m interested in,” Fairbanks said.

Candace Brewer, chairperson for "We Are New Albany," a group formed to oppose the plan to demolish the housing units, also attended the town hall to check out Canon’s stance on housing.

“... It’s an absolute fact people will be made homeless [from this plan]. It’s my number one issue right now,” Brewer said. According to Brewer, she doesn’t care which party a candidate belongs to as long as they fight for the working class.

Even though what’s happening at the New Albany Housing Authority is localized, Canon says solving community problems at the federal level is possible with a representative in the House who is in touch with their constituents.

“We get into talking so much about what is happening at a national level and at Washington D.C., what the national topic du jour is. Congressional candidates on both sides of the aisle run a sincere risk of losing focus on local issues. More often than not the federal government has a big role in alleviating some of the problems going on on the ground in their district,” he said.

Most of what he said he hears in the town halls, such as a comprehensive solution to the opioid crisis or a handle on healthcare, the “issues people talk about at their kitchen table every day” as Canon put it, are solvable through legislative action.

Canon says there are several ways to bring real change to the housing issue. The first would be to “simply provide more resources to U.S. Department of Housing and Urban Development and other agencies that are dealing with the problem of homelessness and housing in general. Beyond that, education and outreach to end chronic homeless and poverty" would counteract homelessness, something he says is lacking in the current leadership.

Canon goes to Washington, advocates for more federal housing funding along with the rest of a platform that has little to no traction with Democratic leadership locally or nationally. Jeff Gahan and local Democrats maintain their positions. Canon takes credit for advocacy, Gahan takes credit for “revitalizing” public housing areas, and half the previous public housing residents still end up on the street. If criticized, Canon says there’s nothing he could’ve said or done as it’s a local issue, Gahan blames the feds, and Democratic leaders and attendant sycophants will determine if that’s good governance by whether or not they get re-elected. So it goes, here and elsewhere.


Paraphrasing another thought of Gillenwater's, we all understand that Canon speaking out about public housing in New Albany right now could help make a positive difference for those residents. Many of us are suggesting he should. If Canon is railing against the Republican mayor in Charlestown over housing issues for the working poor, but not the Democratic mayor in New Albany, there's a big problem.

In fact, it's an even larger problem than Adam Dickey's behind-the-scenes string-pulling.

If I'm to vote for a genuine progressive on the left, then shouldn't the progressivism be equally applied, across the board, come what may?

Or is it more important that local DemoDixieDisneycrats retain their sinecures, even if it means cynically abandoning whatever shards of progressive thinking that somehow seep through Dickey's cordon of self-interested censorship?

New Albany's traditional older white male small-pond power brokers, a slight majority of whom remain nominally Democratic (albeit rarely democratic), have no interest whatever in Canon's enunciation of progressive political thinking. They're laughing at him behind his back, because everyone knows that politics in Floyd County is about beak-wetting and not ideology.

Except they're perfectly willing to to piggyback on Canon's anti-Trumpista platform, because it distracts the younger Democrats who might otherwise see through the public housing putsch, thus providing the Elders with breathing space to fulfill their mythology-fueled dream of slaying the resource-sucking vampire of public housing -- arguably the single biggest straw man in this city's ignoble history of intellectual underachievement.

Fact is, they'll turn against Canon in a Eastridge Drive Minute. They're using him, not the other way around. What actually needs slaying is the local Democratic Party; then it can be rebuilt into something that matters -- and if Canon might be elected to Congress with the local party staying exactly as it is, what good would that do us?

I'm completely assured that if elected, Canon intends to stand in opposition to Trumpism, and will be a progressive advocate. Suits me, but I can't vote for him on these stances alone.

To avoid hypocrisy, Canon also needs to oppose local Gahanism, which has been proven by the mayor's public housing putsch and personnel choices to be indistinguishable in its degradation from the moral rot oozing from across the aisle.