Focus on Portugal: Craft beer in Portugal? Finally, the answer is yes. 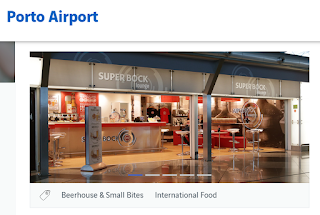 Airport bars you want to get stuck in, by Stephen Beaumont (The Globe and Mail)


By the time you read this, I'll have heeded the call of duty and investigated. Of course, Super Bock is not "craft," although by most accounts, "craft" at long last has arrived in Portugal.

A cold beer in Portugal has traditionally meant one of two things: Sagres or Super Bock. These two everyman lagers, created during military dictatorships, have dominated the country's beer landscape for decades.

But a hop-heavy suds revolution is brewing in Lisbon and beyond. Europe's oldest independent capital city is finally embracing the craft beer booze-fest.

Although its beer history isn't as famous or marketed quite as well as that of some of its European neighbours, Portugal-produced beer predates the country itself, going all the way back to pre-Roman Lusitania. But foreign influence was heavily muted during the Estado Novo, the totalitarian dictatorship that ran the small Iberian nation from 1933 to 1974. Two rebel-rousing domestic brands, Sagres and Super Bock, flowed freely from the taps with little competition. Coincidence that Lisbon-speak for a draught beer is imperial? Not likely.

"During the dictatorship, society was so nationalistic; they didn’t want to import or export, or the influence of anything coming in," says American chef/brewer Adam Heller, who recently opened Chimera Brewpub in Lisbon's industrially hip Alcântara neighbourhood. "They wanted to preserve their identity" ...


Just remember: Super Bock is neither "super" nor "bock," but the last time I visited Portugal -- 18 years and a whole different life ago -- it was a golden lager that worked just fine served very cold. There are several varieties these days, including a Stout and a Pilsener, but still no Bock.

In 2014, when NABC needed a beer for modeling our special one-off World Cup Series USA vs. Portugal brew, Super Bock yet again volunteered for duty.


By the way, there'll be no special World Cup Series brewed at NABC in 2018, unless Josh and Ben adopt a different nation as rooting interest. But what about craft beer in Porto?

Once again, Sara Riobom comes to the rescue at her Portoalities blog.

Ever since I lived in The Netherlands I started to really appreciate craft beer. Therefore, it’s with great enthusiasm that I wrote this Guide of 7 amazing craft beer pubs in Porto.