Finally, some love for Karl-Marx-Allee: "Berlin's Best Street Is a Communist-Era Boulevard."


We've all had experiences that define us, whether for better or worse. They generate instant snapshots in the memory.

Regular blog readers know that my summer of '89 in the East Bloc generated powerful ghosts that remain with me to this very day. For three months that year, I was in Czechoslovakia, the USSR, Poland, Hungary and East Germany.

Most of August was spent working for the East Berlin Parks Department, buffing and polishing V. I. Lenin’s shoes, as attached to a gargantuan statue of the Soviet Union's founder, standing prominently at the entrance to the Volkspark Friedrichshain.

It has since been removed.

The ultimate objective of my voluntarily proffered shoeshine -- and tree planting, and landscaping -- was to make things look tidy and respectable in the Volkspark, which was cleverly reclaimed atop mounds of bombed-out rubble from World War II, and served afterward as the front yard for a hospital that often disgorged armless and legless pensioners into the summer sun for their afternoon constitutionals.

The whole story is here:


The volunteers, both East German students and foreigners, lived together in a military-issue tent camp. The various groups were expected to commute to job sites by public transport, which wasn't difficult, but on the first day, my unit was met at the camp by a work vehicle.

It was the East German equivalent of a heavy-duty pickup truck, and we all hopped into the back, to be driven to orientation at the Volkspark prior to being handed our shovels.

In front with the driver was the park's reigning Communist party functionary, an older man with ludicrous hair dyed jet black. His orientation lecture about the importance of labor was openly mocked by the East German student assigned to translate his utterances. After all, the functionary couldn’t speak a word of English. Years later, it was revealed to me that the translator was a Stasi informer.

Back to those defining experiences.

We were in the back of the truck on a beautiful, warm August day, and turned onto a ridiculously wide boulevard with hardly any traffic. It was Karl-Marx-Allee, and I'll never forget the the feeling of passing through the shadows of the over-sized apartment tower blocks, built during the period just after the war, before building techniques devolved into mass shoddiness.

Surely the chosen route was intentional. It showed off the best that the DDR had to offer. A quarter century later, I returned and talked the missus into accompanying me. It was a moving experience, confronting those ghosts. 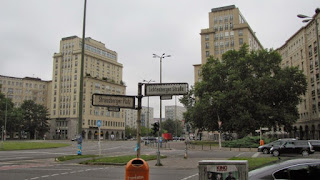 Bizarrely, Karl-Marx-Allee is garnering belated recognition. It doesn't excuse the many and varied abuses of the system that produced it, although once again, it becomes apparent to us that even a stopped clock is right twice a day.

What Berlin needs to thrive is more communist-style development. That’s the verdict pronounced by one of Germany’s leading architects this week. Writing in the newspaper Tagesspiegel, Hans Kollhof (responsible for many of the new buildings at Berlin’s central Postdamer Platz) says that Berlin needs a “new Karl-Marx-Allee,” referring to the monumental Stalin-era avenue carved through ruined East Berlin in the early 1950s. Nothing Berlin has built since, Kollhof insists, comes close to its quality, against which today’s constructions measure up very poorly indeed.

“What now comes as luxury in German city centers turns out to be uptight, prettified project housing. Hidden behind a tired packaging of science fiction motifs or Styrofoam classicism…[by contrast] Karl-Marx-Allee is the only example of German urban planning and architecture that continues the great tradition of the 19th century, that needn’t shy away from comparisons with American and other European cities.”