"To issue a City "press release" that simply quotes a monopoly service provider about "increased download speeds," without understanding the claim, allows that monopoly continued control over a vital city service."


The Green Mouse has many friends. One of them submitted this commentary after viewing yesterday's mayoral press release:

Nearly a week ago, Time Warner Cable announced that it was offering a six-fold boost in broadband speed to customers in Louisville and Jeffersonville at no cost to its customers. The City of New Albany is very pleased to announce that those same increases will be brought to customers in New Albany at no cost.

“Since as early as 2013, I have pushed for increased internet speeds, and recognize the economic impact that this infrastructure can bring to a community,” stated Mayor Gahan. “We are very happy that Time Warner Cable will be extending this speed increase to New Albany.”


Not that Gahan even once publicly acknowledged as much during the entirety of his 2015 re-election campaign.

As Frank Zappa once said, "Take it away, Bob."

Mayor Gahan hasn't done anything to increase internet speeds in New Albany. Time Warner Cable is "increasing internet speeds at no charge" because so many are cutting their cable TV service, opting instead to stream TWC data and video to their computers, watching downloaded movies instead of cable channels.

But the majority of New Albany residents won't see any difference in the "faster speeds". Why? Most folks in New Albany use old modems that aren't capable of using the new data stream rates.

And that's where Time Warner will clean up. In city after city, where Time Warner has rolled out the "TWC Maxx" service that Mayor Gahan mentions, they are charging up to an additional $ 100 - $ 125 per year for the newly necessary modem. That's not faster internet "at no charge."

Even though Time Warner says "there is no change in the price of Time Warner Cable Internet plans, although speeds have increased," New Albany citizens won't see an increase in their cable download speeds without the new TWC modems. Surprise!

And that's where Mayor Gahan is simply missing the overall point about the importance of internet service to the future of New Albany.

As Mayor, he could demand far greater services from the city's monopoly cable provider (Time Warner Cable) when the franchise comes up for renewal. Progressive cities have made TWC provide a host of services for free in order to keep their franchise in those cities.

Philadelphia recently negotiated with Comcast, that city's cable provider. In a series of hearings before the city council, Comcast commited to providing more funding to Philadelphia schools and taking steps to close the digital divide. This makes Philadelphia’s cable franchise a model for other communities across the nation.

The city has an "Internet Essentials" program that includes low-income seniors. Comcast has also committed to providing resources for technology education in Philadelphia schools and to ensuring basic living-wage protections for all its local employees.

Seattle negotiated its existing cable contract to include

• Discounted Internet for low-income seniors
• Increased grant money from $50,000 for one year, to $500,000 over five years, for digital equity programs to bring Internet service to more people
• Laptops for youth at risk of losing their homes

To issue a City "press release" that simply quotes a monopoly service provider about "increased download speeds" without understanding the claim allows that monopoly continued control over a vital city service. The City Council, working with Mayor Gahan could use their power to hold Time Warner's feet to the fire and make them provide more than the bare minimum, but they aren't.

They aren't talking about helping businesses in New Albany with data streaming. They're talking about consumers of TV and movies. When Mayor Gahan says that he "recognize(s) the economic impact that this infrastructure (?) can bring to a community," he may well be worried.

This press release doesn't claim there will be a significant boost in upload speeds. TWC claims a 400% increase, but 4 MB per second boosted to 12-16 MB per second doesn't put you in the same league as Clarksville and Jeffersonville. To illustrate the point - downloading movies - a New Albany resident needs 10.5 minutes to download a movie with Time Warner but a Clarksville resident needs only 8 seconds to download the same movie using fiber optic internet.

Cable franchise renewal has been used by many cities in America to make a real difference in their residents' quality of life. New Albany's Mayor and the City Council should do the same. 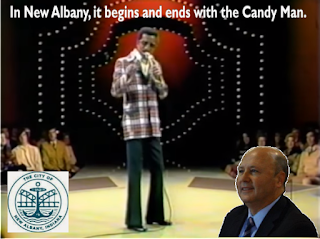