Dog daze: With Gahan back in the safe house, civilian architect Timperman now is the city's official spokesman. 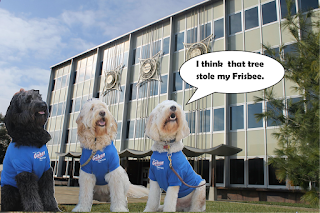 You just knew there had to be a catch -- and I don't mean dogs playing Frisbee.

When Mayor Jeff Gahan donned his standard issue suit and tie for an uncharacteristic public appearance at Cannon Acres with WDRB's Gil Corsey, actually speaking on behalf of his own administration without the usual sycophants and intermediaries for protective filtration,

"Right now the last thing we'd want to do is be disrespectful to anyone," Gahan said.


Amid instantaneous and contagious community-wide laughter, it was only a matter of milliseconds until chief handler Adam Disney speed-dialed Gahan to remind the mayor that the only way he can refrain from disrespect is to remain safely ensconced in the down-low bunker.

In the emergency meeting that followed, you can almost see them looking around the room ... so, who can we use?

Hall? He already does council meetings.

Duggins? No, he's got deputy mayor shit to do, and anyway, television cameras bring out the dollar sign tattoos a bit too vividly.

Timperman? Ah, now there's an idea. He's got more credentials than Bono Road has potholes.  Perfect. Get him out there now ...

... "If the state archeologist wanted to come down here and check again, that’s fine with me, because I don’t have any dog in this fight and I think that the city has tried very hard to comply with the state’s requirements," Timperman said.

Remember when fans of the New Albany farmers market were led to believe that the market was going to be moved to the parking garage?

Of course, they were misled, and it was pure stage-managed hokum, but at least it showed there actually were fans of the farmers market.

Fast forward to the past week's dog park controversy. Zealous advocates of the dog park now are deluging social media with their support for ... dogs... wait. No, they're not. Outside of city workers and the mayor's family (is that a redundancy?), there isn't any support for a dog park.

Yet again, we ask: Why is money being spent on this -- Native American site or not?

SHANE'S EXCELLENT NEW WORDS: Autodidact -- and how David Duggins denigrates one of them amid Team Gahan's zeal for a dog park.


One week later, the newspaper reluctantly diverts its attention from cooking school and learns that "park site in New Albany draws concerns."

Belatedly addressing the Cannon Acres dog park fiasco, Mayor Gahan insists he watched "Dances with Wolves" on the VCR over the weekend.


Tony Nava on WDRB: "Would we want to use a church grounds as a dog park?"


4:00 p.m. today: Citizens trying to save a Native American church from being used as an inappropriate and unnecessary dog park.


Commentary: Amid quintessential City Hall arrogance, a petition to "save the Cannon Acres Native American site."

Dog crap on a sacred area: Jeff Gahan moves timeline forward, with the desecration of a 3,000-6,000 Native American site to begin Monday.

The city of New Albany may soon try to destroy a 3,000 to 6,000 year old Native American site to build a dog park.