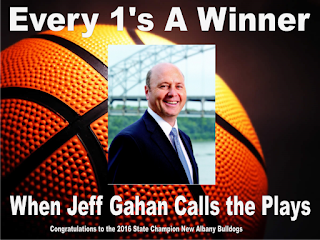 Fresh off his state finals win, NAHS mayor and basketball mentor Jeff Gahan announced that he has decided to skip college coaching and move directly to the NBA.

"In this fall, this is very tough, in this fall I'm going to take my talents to the Bay Area and join the Golden State Warriors," said Gahan amid the bedlam as Bud Light Lime corks popped in his suite at the downtown Indianapolis Hampton Inn.

"Steve Kerr has nothing left to prove," said Gahan, "and neither do I."

Asked who'll replace him as mayor, Gahan waved away the question.

"Who said anything about quitting as mayor? I can run the city and coach the Warriors with my eyes closed."

"Duggins can have the Bulldogs until we TIF a new coach."

Editor's note: New Albany really has won the state championship, but the coach is Jim Shannon. Congratulations to the team.
Posted by The New Albanian at 3/26/2016 10:26:00 PM