The Tolling Authority staged a meticulously choreographed mini-rally this afternoon. In a bit of biting irony that surely escaped most of the tolling authoritarians present for duty, it took place at the Muhammad Ali Center, an edifice celebrating democratic empowerment, which was not at all on the menu of this "public input" session.

The best line of the night: "This isn't a public input session. This is a groundbreaking ceremony."

Somehow, I lasted the whole three hours, and spoke with most of the tolling authoritarians present, at least one of whom forbade me from ever using his name again in print. However, flattery will get him (and them) nowhere.

Let's just say that in all conceivable respects, the gathering was thoroughly Orwellian. After the first hour, the logic became so circuitous that I feared having been drawn into an Escher drawing.

Yes, I made it a point to track down David Nicklies of the Bridges Coalition, which is connected to the Tolling Authority in most significant ways except for anyone actually admitting to it, and he repeated to me that all businesses always should be willing to sacrifice for the wider community benefit.

No, I did not ask Nicklies for evidence that he has ever followed this dictum.

With nuanced condescension, Nicklies then remarked that upon closer inspection, his comment in the morning paper to the effect that only 3% of the community opposes tolling was exaggerated; it's even less than that, he said.

Nicklies in person is even more of a dismissive, unctuous dirtbag than voluminous prior notice might have indicated. Two showers later, and I'm still not clean.

Here are a few photos. 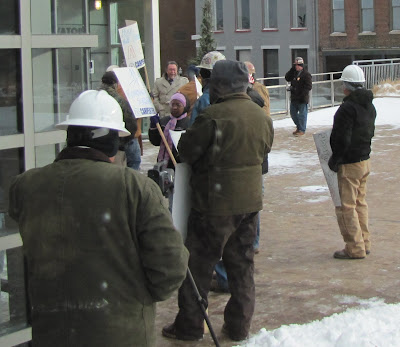 David Hawpe presses the flesh with workers from the building trades prior to the start of the meeting. Hawpe, who escorted an chirpy, exhumed Leni Riefenstahl to the confab, happily left the premises before the public session began, having presumably made his point in private prior to the elevators being opened. 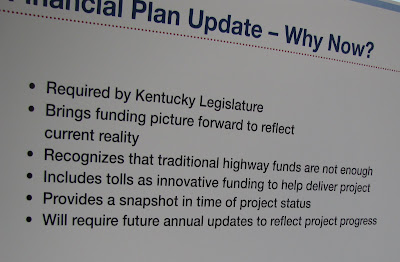 In short, we must be innovative to finance the bridges boondoggle, and even if we didn't need to be innovative and could finance all of it without tolls, in 15 or so years there'd still be an antiquated 1950's solution to a 2050's problem with not a cent left to do it right in terms of genuinely enhanced mobility. 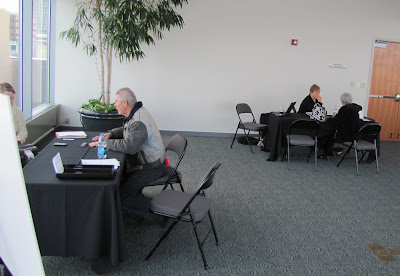 Wanna comment? Right this way, and a steno will take your testimony, which we promise to study in depth for voting Thursday on a plan that's a plan, but isn't really a plan if you mean something bad by it. Got it?

It was a farce from start to finish. If I can muster the strength, I'll churn out another column for the Thursday edition of the Tribune. If not, I probably will, anyway.
Posted by The New Albanian at 12/13/2010 09:00:00 PM

They are obviously afraid, as they have been from the start, of answering questions in an actual public forum.

Thanks for writing on this Roger. I hate that I missed it but the more I hear about the format, the more I realize I'd be in Metro Corrections right now if I had attended.

I am in receipt of a letter from Michael Hancock, Governor Beshear's secretary, which is dated October 13, 2010. Here's snippet: "we understand that the Bi-State Authority actually plans to have "public meetings" on Bi-State Activities in the near future. These public meetings will give everyone ample opportunity to be heard, as promised by state and local leaders."
(And now we know why "public meeting" was in quotation marks."

Yes, thanks for braving this "public forum". If I had attended, I can see myself saying things I wouldn't regret but could get me in trouble.

Anyway, I was just thinking that if we were actually planning to corner the Authority like rats, making them squirm so obviously and so hideously, we have achieved our objectives today. As more news of this "public forum" gets out, the Authority may start to realize, "we've been had."

They did it to themselves, and any recommendation they will make on Thursday that includes tolling will be Dead On Arrival with the public.

Tonight's major tolling authority talking point (a) seemed to be the importance of doing something pro-active now before the Kennedy Bridge is closed for repairs, and then where would we be?

Well, we'd have a new bridge carrying traffic in one direction, and an old one closed for repairs, I guess.

Point (b) was: Don't blame us, we're just trying to implement a democratic plan that was never subject to a vote, and we work real hard ... don't blame us.

At any rate, not a single one of the ones I spoke to tried to deny that an examination of the economic impact on business has never been done, or really even contemplated, but of course their own timeline demands that they make the impact first and study it later.

Absolutely worst of all is that Nicklies dude. Talking to him was like the obligatory snake scene in the Indiana Jones movies.

I really really want to believe that, Steve. But between the NAFC school board gestapo moves and the BA's gestapo moves, I'm feeling jaded and defeated today.

I know the Feds would likely strike down any attempt to toll existing bridges, but only if those tolls paid for new infrastructure. They have said tolling is fine if it pays for the road it's placed on, and the 3 legged stool propagandists have said that's what they should do with the Sherman Minton--toll it under the guise of paying for its upkeep rather than paying for the new bridge(s). If the BA gets the ok for that (and you know they'll try--it's "innovative"), I think this is all a done deal and there will be no stopping them. Daniels has already renegged on half the promised Indiana funding, and he's on record as saying he wants to jam tolls up our collective asses so people in Carmel don't have to pay for our roads despite the fact that we pay for theirs and then some. I was unable to attend the meeting tonight (either meeting--NAFC schools or Tolling Authority), so I guess I'll be writing my official letter to the stenographer and have it officially ignored by the BA. Wonder how many opposition letters they'd have to get to give a shit?

Another major chuckle occurred when Charles Buddeke told Keith Fetz of the Jeff council that if local counties would be innovative enough to pass LOIT taxes, all this toll talk would be unnecessary, or something to that effect.

Both Fetz and Gonder shook their heads at that one. John, if you're reading, am I remembering this correctly?

Charles Buddeke is the one who told me that the whole Bridges Authority situation is a mess, they don't know what they're doing, and that he wishes more knowledgeable people like yours truly could be involved.

I'm sure Jerry Finn or someone will accuse me of twisting things around, but that's verbatim what the man said-- at the exact same meeting at which it was announced that the public comment period would be discontinued.

Tha answer: No. One of them whose name I cannot mention, conceded that he had no experience with my line of work. I responded: Neither do I with yours, but I don't pretend to tell you how to run what I don't know, and you insist on telling me the medicine won't hurt, when you've no experience in tasting it.

Then it go weird, but whatever. The point is: Tonight was a mocking charade.

Rog, Please keep doing what you have been doing all of your life. I used to be a fly in the ointment, but my position was eliminated. As Jeff said, they are afraid, and have been from the start. Maybe I can learn something from you and start a new career. If enough people speak up, somebody has to listen, right? Or, at least, hopefully listen.

Even if recommended on Thursday, there are a lot more opportunities to stop the tolls. Most of the community know how wrong they are, and therefore the public should never give up trying. In many ways, the wind is at our back.

A reprise seems in order.

Breathtaking how little can be said by so many, so many charts, so many hundreds of thousands of our dollars on consultants, engineers..so many many years and what it all STILL boils down to is - we don't have the money to build this nightmare but please don't wake any of us up.

Picture Money = "innovative" = these are just our day jobs guys, give us a break = ClusterF*$K.

Also - my "to do" take-away from this event is
"Those interested in formally submitting comments were told to write them down, e-mail them in or give their statements to a court reporter in the room."
The public sessions/input are mandated by Federal law. They are often scams. But, if you send a letter of opinion to the authority with cc to Fed overseers, it will end up counting.

Good to know, G Coyle. Is there a specific Fed group we should CC on our statements?


Steve Magruder: "Most of the community know how wrong they are, and therefore the public should never give up trying."

You're right, Steve. Yesterday was just a draining day. I have some renewed energy for fighting today :)

OK, I'm prolly not the best person for addresses to write. I'm trying to think who has the most political skin in the game, so to speak. Does it feel like the ball might have been handed off by Daniels? I'd guess Lugar is the only Indiana pol with enough power to pull some pork from the current tax-cut-extension for "6600 oligraphs" sausage-session. Or McConnell. I feel like I'm trying to see who's left standing as the first real waves of public opposition break over the PR phalanx known as ORBP. I'm curious what Jeff thinks...