A quick look around downtown ... courtesy of the Urban Enterprise Association.

Mike Ladd of the the New Albany Urban Enterprise Association (NAUEA) provides these photos of a walk around downtown New Albany yesterday. Click on the image for a larger view. 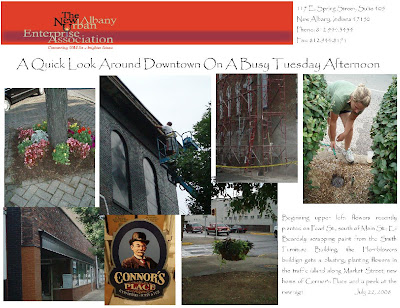 So many things are happening that it's difficult to keep track, but here are a few random notes.

I'm a member of the UEA board, and we're seeing a record number of applications for facade grants as more buildings undergo renovation. The UEA has taken a lead role in the landscaping project currently underway downtown, and is seeking other grants to continue the project, both from the Horseshoe Foundation and in conjunction with Develop New Albany.

Meanwhile, Develop New Albany has sold the White House Center for redevelopment, and the organization's "First Tuesday" networking gatherings (next up on August 5 at the Honeymoon Mansion on Main Street) have been a great success.

Don't forget that it's Wednesday, and that means the Farmers Market will be running downtown later this afternoon.

I'm told that there'll be a "before" open house this coming Sunday (the 27th; 4 - 7 p.m.) at the Fair Store, now under rehab on Market Street just across from the soon-to-be-revived Connor's Place (and less than two blocks away from NABC's new brewery and taproom project, for which I'll provide an update later this week).

If Matt and Jessica are reading ... want some beer on Sunday? I may know how to make that happen.

As with Mike's photos, this isn't intended as a comprehensive survey. What are we leaving out?

What's the latest word on the winery? I drove past this morning and thought there was a For Lease sign back in the window.

Last I heard, it was moving forward. I'll try and get an update when I go to the Farmers Market here in a bit.

The winery is moving forward. Gary's doing the work himself (with some assistance)so that slows down things.

Roger, I live near the boundary of the urban enterprise zone; however, I am unsure on which side of the boundary I am. I called the President of the NAUEA but never got a response. Is there a way that I could find out for sure? If I am outside the zone, is there a way to have the boundary moved?

Larry: Mike can tell you aaalll about it.

We are "them people" so don't expect us to give up so easy. The winery project is moving forward. Keep in mind that this is a preservation project as well. Everything is falling into place so you can expect things to begin speeding up soon.