Of all the municipal candidates for office who have established blogs, only two do not permit comments, which is another of saying that only two have a problem, even if oblique, with engaging in genuine dialogue on-line. Yep, they'd be Steve Price, the accidental 3rd district incumbent, and Professor Erika, aka Vickie Denhart. We've not seen her campaign signs, but it seems that CM Price is “standing up for you,” just so long as he isn’t burdened with “communicating with you,” or troubling his ghostwriter with pursuing the same aim. 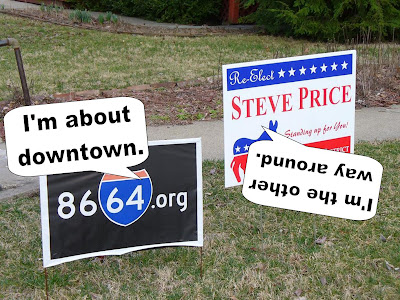 Politics sometimes makes bedfellows straight out of Bizarro Land, but this is ridiculous. The "org" proposes to spend less money for the greater good, while the "pol" seeks to spend no money, for no good, at any time. Doesn't sound like a strategy for growth, but only your inner Jethro knows for sure.

At least one other has noticed, as I did, that at-large council candidate Shirley Baird's blog has disappeared.

Recalling that Shirley was the first candidate to blog publicly in favor of rental property inspections, we're left to ponder whether the Gregorys somehow got to her.

Shirley, please let us know whether you're still out there somewhere. Your candor was refreshing, but as we know all too well, no good deed goes unpunished here in the New Albanian slumlord gulag.

My husband is surely going to be pleased you actually took the time to come past our home and photograph our yard.

Our choice, our house, our yard, and our opinions. Chew on Steve all you want, but it will do you no good on Main Street.

Talk to Senator Sipes brother, Dan Wieglib about Maury Goldberg and then tell us exactly what we know. The year would be 1993 -- right Maury?

We do not support Ms. Denhart, nor Mr. Hollis, nor others running at large. Please don't put the assumption out there that because we have Mr. Price's sign we are aligning ourselves with other people. False assumption -- but you know what they say about that word "assume".

Again, glad you came by to visit.

I don't think Roger assumed anything, just pointing out what appeared in a picture.

I'm really interested in talking with FINCONDEM, about her feelings on Charlie running, and how in combining everything that Price et al preach about fiscal responsibility they aren't willing to relinquish this position to someone who has proven positive track record handling business's finances.

seriously Y, this isn't an attack I really just want to know. shoot me an email if you want it's in my bio. I'd really like to open this dialog up, I left a comment on your site, but it never got published or responded too.

Don't know much about fishin', but I vaguely recall my father telling me that sometimes they hit on the wrong bait, so what the hell; clean 'em and fry 'em just the same.

But let's leave Lent out of it.

ADIFC, I framed the photo in such a way that I hoped it would not show much of the yard. Obviously, I couldn't trespass in order to shoot it from the inside out, so I did what I thought I could to preserve anonymity.

Then again, of course, one doesn't place such signs without wanting people to see them.

BTW, Coop, if you're reading, I'm in the process of trying to get a definitive statement of the city's view of street spam, i.e., where campaign signs are allowed to be and where they're not. Then, we'll be able to harvest the spam safely and according to the law, whether enyone else is interested in enforcing it or not.

Yes, I am still here. And no the "Gregorys" did not get to me. I would not know one of them if I saw them.

I closed the blog because it became too time consuming and for no other reason.

Thanks for the compliments.

Thanks in return for letting us know.

Your spam zapper can really do some great work this election season! No candidate is allowed to put any signs in any city right of ways, along side the roads, etc.

The State Election Commission and the County Clerk has those rules, probably memorized. And, if there is one City that takes the signage to extreme...you're hitting on the money (big time).

BTW, let us know the next time you'd like to take pics and Frankie will have ya in for a home brew beer. Neighbors seem to like it; unfortunately, I'm not a dark beer fan.

Someone should tell Dick Stewart about the law, just in case he doesn't know (ahem, ahem).

Are his signs lettered in all CAPS?

No, but that would be funny. I have noticed some of his signs where they shouldn't be. Sorry Dick.

Well, DICK STEWART was always espousing the "little people who play by. the rules," so it's fairly disappointing, isn't it?

I've been seeing Bill Castile signs; I thought he was disqualified?

Disqualified can mean a lot of things.

If the rumors are true, Mr. Castile was not or is not registered to vote. The state/county have done some incredibly large purges of the voting rolls over the past two years, so that might explain it. Maybe he never registered.

As I understand it, that's irrelevant. The qualification is that you must be a resident for a sufficient number of months. I have little doubt that Mr. Castile has registered to vote by now, but even if he hasn't, there is still time to do so.

If you have ANY doubt that you are registered (maybe you skipped an election or two) or that your registration is no longer in effect (we know of three families whose registrations were valid but who were at first rejected at the polling place), go to the county clerk's office and verify.

A year ago, the co-editor of this very blog had his franchise disqualified, forcing him to cast a provisional ballot which was subsequently rejected. The co-editor was blameless - it was a pure bureaucratic bungle.