Charlie Harshfield, one of three Democratic primary candidates for the 3rd district city council seat, held a well-attended fundraiser yesterday at Treet’s. When I snapped these photos, most people in attendance were inside eating breakfast. 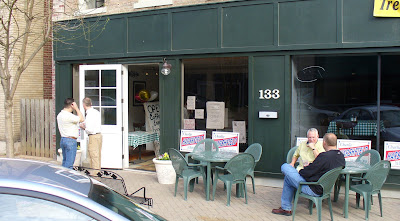 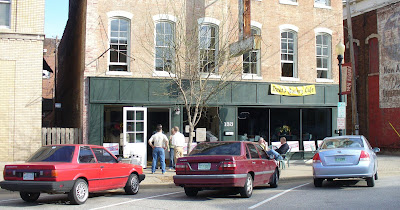 I'm told that numerous people stopped by during the two-hour event, asking both about Charlie's candidacy and Treet's, which ordinarily isn't open on Saturday mornings.

There was also some buzz with the owner about a trial run of Saturday hours.

In addition to great breakfast and lunch items, they have a cappuccino machine as well as wi-fi. It's a great place indeed.

You could feel the good buzz for us downtowners who walked - such a nice day and oh how walkable NA is!

Well I have to say that TREETs is by far one of my fave places for breakfast now. The owner remembers us as Isabella's parents and the times we have ate there she has fixed Belli pancakes and fruit at no charge with out us asking. usually she just chows on our food but this was a very nice thing she did. I recomend treets to everyone. Saturdays would be awsome sense my wife works on weekends and I am not the best cook.

TREETS is very good. We just went there again for lunch today. Saturday hours would make it much easier for us to visit regularly.