'Walkable' downtowns in demand in remainder of country. Here, we get a dog park to drive to. 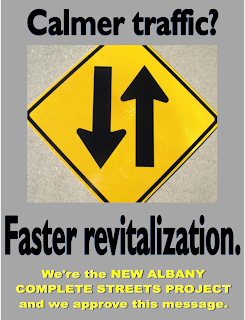 I persist in citing interviews and articles like this one because each time they appear, as they have repeatedly throughout the United States in communities great and small, New Albany's institutional timidity and obliviousness are brought into sharper focus.

It's genuinely breathtaking that a municipality like ours believes that constantly repeating past patterns of failure will somehow result in a different result in the present time, and of course they won't, but it didn't matter back when decay management was the only game in town. What these patterns of dysfunction might do now, as opposed to the past, is negate numerous other efforts -- ranging from entrepreneurial investment to neighborhood stabilization -- by the city's chronic refusal to think outside self-defined boxes.

Note to self, and to the world, especially residents inhabiting one-way arterial corridors: This Q & A on walkability with Jeff Speck, including the two excerpts quoted below, is filed at the web site under "Real Estate."

Think about that. After all, city planners aren't.

... You said working directly with mayors who want to revitalize their towns and cities was a great design education for you. What did you learn from them?

The mayors were using street life as the principal indicators of the success or failure of their communities. People, especially millennials, want to live, work and play in walkable places. Entrepreneurial talent is especially mobile. You want to first become a place where people want to be, then people with creative talent will come to your city.

To draw pedestrians, it's not enough to just make a place safe to walk, right?

It has to be useful, safe, comfortable and interesting.

Some of the downtowns around here have added nicer sidewalks and streetlights. But you say that's not the answer, or at least not enough by themselves.

In 320 pages of my book, I don't think I mentioned streetlights or sidewalks once. Often the least effective approach is to spend money on the streetscape when you should be spending money on calming traffic, inviting bikes and creating incentives for the right type of development.