Dan Coffey kicks off his race for Floyd County Commissioner. 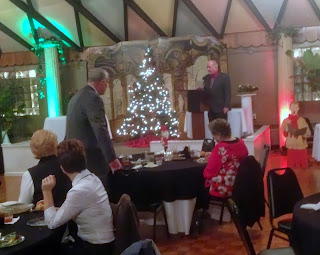 Last night, the Culbertson West played host to the opening act in Dan Coffey's quest to topple Mark Seabrook and replace his former council colleague as a Floyd County Commissioner. It was a low-key event, with Stan Robison introducing Coffey, and the candidate making a short ten-minute speech, in which he offered a prelude to what certainly will be the central theme of his campaign: Seabrook's pivotal role in mismanaging county government.

My friends, that's a cogent theme indeed. What's more, it's a point of agreement between Coffey and me, and while it's certainly true that we've legendarily disagreed in the past, and will do so in the future, my present mood reflects the timeless adage: The enemy of my enemy is my friend.

Seabrook's complete absence of interest in the usurpations and maneuverings of his own health department is a powerful, enduring indictment of his cavalier attitude toward the duties and responsibilities of the executive branch.

Me? I don't find the health department's eagerness to make a mockery of statute all that hilarious, and then there's the defamatory web site photo. Throughout the battle, Seabrook has looked the other way. So has fellow lock-step commissioner Stephen Bush, himself willing to countenance the health department's chicanery while expecting us to believe such negligence is compatible with being Sheriff.

Really? If Dan Coffey can take one of them down, it's good by me. There'll be much more to say as the campaign picks up steam. When I asked Coffey if he would have a platform soon, his reply was yes, and in the interim, he's happy to answer any questions about issues.