Let's do an Elector Day recap, with Electimus and a requisite graphic Elector retrospective. 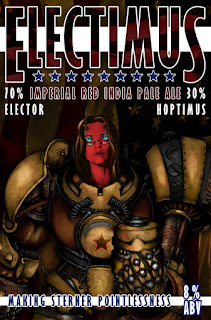 Let's do an Elector Day recap.

Since 2010, Indiana no longer labors under the restrictive "blue laws" that formerly forbade alcohol sales until the closing of the polls at 6:00 p.m. Kentucky has no such luck, and life there will be painfully dry until early this evening.

Over here on the Sunny Side, some taverns will open at 7:00 a.m., and package stores will be doing business as usual.

Both NABC locations will be open at 11:00 a.m., serving beers of proven merit. Our time-tested Elector Ale (for over a decade, it has made democracy pointless) will be on special all day at $3 for an imperial pint.

Also, there's a rare beery surprise: Electimus, which comes out of hiding only during presidential election years. It's a blend of 70% Elector and 30% Hoptimus, and there's only one keg of Electimus at each NABC location. That's it.

In 2008, there was no Bank Street Brewhouse, and so the tradition begins there tonight. I'll be there. The Pizzeria & Public House will be rocking, too, as has been the case since Bill Clinton was elected in 1992.

Vote (and drink) early and often, people. Let's kill a few minutes with a visual history of Elector. First, the official Tony Beard "HOPS" poster for 2012. 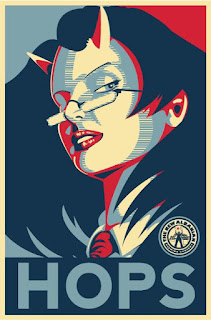 The Elector Day 2008 poster was designed by John Campbell. The crazed John McCain image is a classic. 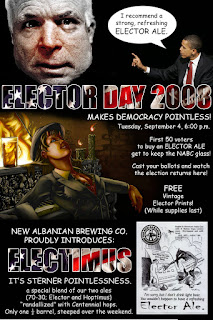 Just how far has Elector progressed since the first clip art cut 'n' paste from 2002? Here is what I cobbled together, pre-Tony. 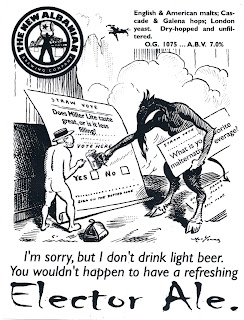 By 2007, glimmers of a new Elector were to be seen. For a fairly succinct history of Elector, how it was first brewed and the way it came to be named, go here. 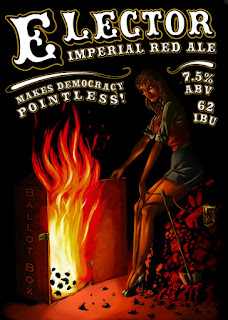 There was a retrofit in preparation for bottling, once Elector was being brewed downtown at Bank Street Brewhouse. 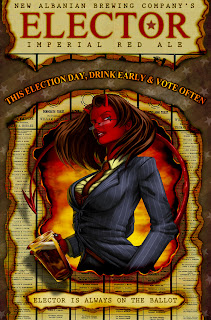 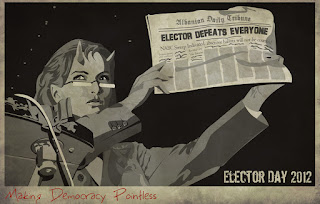