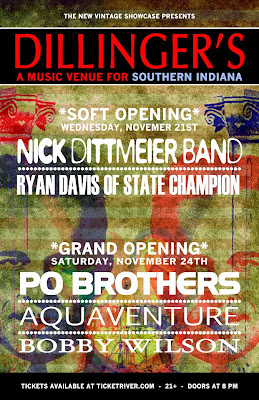 The Bank Fusion Cuisine & Lounge opened a year ago with a Dillinger Room, and now there's been a rebranding. Here's the scoop, courtesy of the Dillinger's Music Venue page at Facebook.

Dillinger's is a music venue for Southern Indiana, located next to the popular Irish/Exit and was originally The Parthenon Building, which served as a bank established in 1837.

The building is multi-level and capped with a dome and is registered on the National Register of Historic Places as part of the New Albany Downtown Historic District. Many of the buildings alterations, including the steel reinforcement under the dome, were put into place to better protect it’s holdings from an anticipated robbery by famed bank-robber John Dillinger and his crew.

The New Vintage books and promotes the new venue. The company has spent the better part of two years booking/promoting all shows at ZaZoo’s in St. Matthews and occasionally at other Louisville venues, including Zanzabar and Headliner’s.

Hunter Embry, who runs The New Vintage with partners DeadBird Studios and Ryan Thompson, said “Dillinger’s is designed to cater to New Albany’s fast-growing nightlife scene. It will be a full-fledged music venue, much like the ones we’ve worked with in Louisville.”

Embry plans to bring in local, regional and occasionally, national acts to Dillinger’s. Dillinger’s will also be available for private parties and events.

“There’s been a solid music scene growing in Southern Indiana for quite sometime now and the town deserves it’s own venue. Like ZaZoo’s, Dillinger’s will have a top-notch PA with sound engineers to match. Bands will enjoy the comfort of green rooms and hospitality.”

"This place is rad - the huge pillars out front, tall ceilings, rustic look and that dome. It's going to be a pretty cool spot to see live music."