Judge says bats won't be harmed by ORBP boondoggle, but jury's still out on tolls. 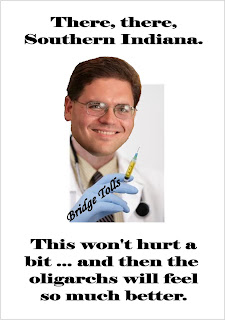 Curtis Morrison pointed this way, noting a misleading headline given the "yet to be determined" language of the final paragraph. I'm still waiting for Indiana's triumphant, penurious Republicans to explain the monstrous price tag, but the Clere Channel is far too busy lamenting Tony Bennett's ouster to pay very much attention.

Attempts to halt the Ohio River Bridges Project by the Coalition for the Advancement of Regional Transportation were knocked down Thursday following a federal judge's ruling.

The Courier Journal reports CART in September sought a preliminary injunction with issues that included possible harm to an endangered bat species from loss of tree habitations along the eastern bridge route between Prospect, Ky., and Utica, Ind.

But U.S. District Judge John B. Heyburn II said Thursday the tree removal doesn't show any harm to the Indiana and gray bats, according to the report. He added the court will consider other CART arguments including water and air quality harm, discrimination against minorities and that the project's tolls are illegal.