View the new exhibitions at the Gamborg Gallery. 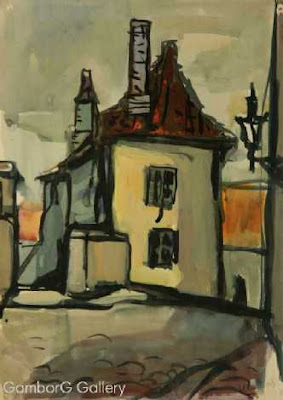 Regular readers know that from time to time, I reintroduce my friend Allan Gamborg, Danish by birth, and a longtime resident of Moscow. Allan has enjoyed much success in his "second" (third? fifth?) career as a purveyor and advocate of Soviet-era art and artists. You can use the handy Blogger search feature with "Gamborg," and see previous postings.

The format's usually the same, and it's always worth a few minutes to peruse the art. You need not be a Commie to enjoy the links to Allan's on-line galleries.

As in the past, permit me to thank Allan for his boundless hospitality and to share his latest posting.

Dear Friends,
We have a series of new exhibitions on the Gamborg Gallery on the web:

A series of artwork showing the Olympic games in Soviet Art.

Anti Smoking Campaign
A series of Soviet posters and artwork propaganding against smoking.

Boris Derzhavin (born 1921)
Boris Aleksandrovich Derzhavin studied at the Moscow textile insitute in the early years after the war, and later he became a teacher of graphics on the 1950-1960s at the same institute. Both his oils and his gouaches show that he was not educated in the classical socialist realism of the time, but with more freedom of expression.

Nina Shirokova (Born 1934)
Nina Ivanovna Shirokova was born in Tarusa, in a family of a carpenter and a teacher. She was always fond of drawing, and from her early years she took private classes in drawing. From 1956-62 she studied at the Moscow Textile Institute (MTI), which she favoured particularly because of the controversial non-conformist teacher Eliy Bilyutin.She specialised in textile design. Amongst her professors were Pochitalov (painting), Aleksandr Ivanov (graphics), and Aleksandr Dubinchik (drawing). Before and during her studies, she took private classes in painting from VKhuTeMas artist Konstantin Lekomtsev, where she also made friends with his wife, famous Moscow artist Natalia Gippius. During the 1960s she held different positions in relation to industrial and interior design, for example her design of the ideal Soviet one-room flat in 1963 and the interior of Aeroflot planes in 1964. In the later 1960s she did a series of scarfs and textiles at the Schyolkovo textile manufacture. During the 60s and 70s she regularly visited the studio of Eliy Bilyutin, who was famous in the period for his teaching of non-socialist realism methods of drawing and painting (formalism). Her personal works of that period are strongly inspired by Bilyutin and by the style of the non-conformists. Thematically, she paints landscapes in bright and powerful colours, still-lives, as well as nudes and portraits. She is a highly skilled and inspired draughtsman, with a simple and bold line. Her favourite media are pencil, gouache, tempera and watercolour. Nina Ivanovna’s works are a bright example of the artistic freedom that many former students of the Moscow Textile Institute were able to take advantage of. They were not educated according to, and consequently not artistically limited by, the dogmas of the Socialist Realism. Her personal works were very rarely shown publicly in the 1960s-2000, particularly the works painted in her Bilyutin period. Nina Ivanovna now lives in Moscow.

Galina Ivanova (1937-2009)
Galina Ivanovna Ivanova was born in Moscow in 1937. In 1959 she graduated from the Moscow Pedagogical Institute named after V.P. Potemkin. She participated in her first exhibition in 1961, and in 1967 she joined the Artist Union, the graphics section. During the 1960s and 1970s she travelled extensively in the Soviet Union, depiction the old cultural centres of Russia, and the ancient churches. During the 1970s, she printed a large series of images of the old Moscow, around the Patriarch's Ponds and the Garden Ring. Her favourite media were lithography and watercolour. In particular her lithographs are very recognisable, in her personal soft and pastel-like style.

Vera Orekhova (1907-2007) -
Vera Andreevna Orekhova studied at the Famous Moscow VKHTUMAS art institute in the late 1920s, amongst here teachers were Gerasimov, Rodionov and Konchalovsky. Her favourite media are watercolour and lithography, and she is famous for her images of Moscow in the 1940s-1970s, and of her wonderful still-lives, inspired by the French impressionist and post-impressionist school.

David Borovsky (1926-2004)
David Borovsky was a prominent graphic artist, active in Leningrad. From 1945-1952 he studied at Repin State Institute of Painting, Sculpture and Architecture of the USSR Academy of Fine Arts under K. Rudakov. His graduation work was the series of illustrations Maxim Gorky. He began exhibiting in 1952 and participated in major art exhibitions in the USSR. Borovsky illustrated books for Goslitizdat, Detgiz and Iskusstvo publishing houses. His most known works in book illustration are: Compositions by I. Turgenev (1954-55), Mountain Nest by Mamin-Sibiriak (1955), Who Lives Well in Russia? by N. Nekrasov (1960), etc. Borovsky created the series of color lithographs: Leningrad Choreography School (1955), V.I. Lenin (1957) and works in book illustration, a series of colour monotypes (1961-1963). He produced a famous series of lithographs depicting the workers of the electricity industry.

Dilyara Varlshina (Born 1937)
Dilyara Khalilovna is a well-known Moscow graphic artist, specilalising in linocuts and lithography. She finished the Moscow Polygraphic institute in 1971, and in 1977 she joined the Artists' Union, the graphics section. In the early years after graduation she worked in the theatre doing stage designs and costumes, and later she started working with Moscow publishing houses as a book illustrator. The favourite theme is sports, and many of her prints depict cycling, voleyball, fencing, and gymnastics.

Master and Margarita, illustrations by Mihai Brunea
A series of illustrations to the famous novel Master and Margerita by Bulgakov. The main character wakes up after a heavy night of drinking and finds himself in the company of Voland the devil, who moonlights as a foreign consultant. The book was issued in Kisnyov, Moldova in the 1980s.