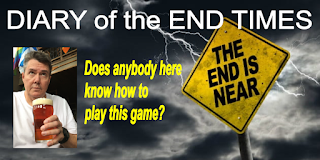 Conniving censorial and prohibitionist local do-gooders might continue to drag me into the fray now and then, kicking and screaming (but always factual), but my stated goal is to devote my sabbatical to exploring other nooks in the periphery.

As Democrats and Republicans exhibit precisely the same behavior and expect (accurately) that we'll continue to choose one and reject the other, when their corruption is all-inclusive ... well, obviously we're living in the end times.

Last week it was designer ice for your high-end hootch. This week, just two small items relative to taste, or the absence of it.

Josh Noel writes about beer (and other beverages) for the Chicago Tribune. If you're interested in beer and you frequent the Twitter neighborhood, he's a good follow https://twitter.com/hopnotes. Noel reports the ongoing degradation of better beer's once bright promise.

It gets worse. My fellow males always have embraced cluelessness as a birthright, but who knew that Valentine's Day proposals at Olive Garden are a thing?

As legendary baseball manager Casey Stengel is reputed to have asked his woefully inept 1962 New York Mets, "Does anybody here know how to play this game?"
Posted by The New Albanian at 2/10/2020 06:48:00 AM