New Albany too? How will #MeToo play out here at the grassroots? 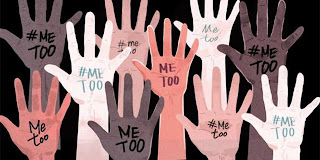 “Sexual assault is the most under-reported crime in the United States. It’s a crime that people usually tell nobody about.”

Just the other day I was at the downtown Coffee Crossing reading my book and making work notes. At an adjoining table, a man and woman I didn't know were talking about the #MeToo movement.

It wasn't my choice to eavesdrop, but it's hard not to hear people when they're speaking in normal conversational tones.

Their chat centered on Harvey Weinstein and Kevin Spacey, although they also were referencing a sexual harassment scandal involving Baptists in Texas, with which I'm completely unfamiliar.

This started me thinking. How has the #MeToo movement played out here in New Albany? We might extend this to the entire Southern Indiana sector of metro Louisville. There have been few high profile #MeToo stories in the city of Louisville, including the LMPD rape case in 2018 and a handful of others in the food, drink and hospitality business, although the latter seem not to have been manifested in formal legal proceedings as with Weinstein.

We've been here before, blogwise.

There'll be some who will question this decision, given the absence of an attention-grabbing headline in New Albany thus far. Maybe so, but we all know it's here, too -- don't we? In a place like this, we tend to be a bit behind all conceivable curves, and so even if our civic discussion about sexual harassment and assault is belated, it's still the right one to have.

Given that New Albany fully corresponds with the old saw about this being the best place to be when the world ends because it takes a decade for anything important to reach us, well ... what about us?

I used the enduringly flimsy search engine at the News & Tribune to see what sort of information on the topic the purported newspaper of local record has published, and there have been a couple dozen articles going back to 2017, all of them involving #MeToo nationally, not locally.

The following story is from Kalamazoo, Michigan (population around 75,000 -- roughly double New Albany's), dating from November, 2018. One thing that jumped out at me was the Victim Advocates Unit in Kalamazoo; a quick search reveals that yes, we have something similar: Victim & Witness Services at the Office of the Floyd County Prosecutor.

Readers, your thoughts are appreciated. I'm sure there is lots I've missed pertaining to this topic, so educate me, please.

Does #MeToo take on a different dimension in a smaller town where so may people know each other? Think of the differences in local opinion prompted by the judicial melee in the White Castle parking lot in Indianapolis.

Would big fish in small ponds have even more self-interest in covering up such shenanigans were when they to occur here?

Here's the link to Kalamazoo.

#MeToo: How a movement changed a community, by Franque Thompson (WWMT 3)

The Me Too movement continues to spark change addressing sexual assault worldwide. The campaign exploded on social media and television, as victims stood up to their abusers. The movement ist still making waves in west Michigan and across the state.

Launched in 2006 by civil rights activist Tarana Burke, the Me Too campaign was designed to empower girls and young women of color who experienced sexual abuse, particularly in underprivileged communities. A year later, in 2017, the idea ignited an international movement for survivors of sexual assault, shared across social media with the hashtag #metoo.

According to the latest Michigan Incident Crime Report, reports of sexual assault increased 4.6 percent in 2017, the year Me Too gained global attention. The crime report also states that girls ages 18 and 19 have the highest numbers of cases reported.

Sherry Brockway, the director of emergency response services at YWCA Kalamazoo, said almost 80 percent of victims know the person who assaulted them.