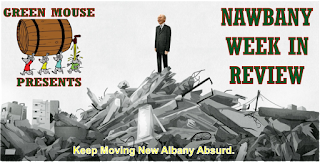 Overheard by the Green Mouse at a otherwise deserted local hangout: "Gahan's like a kidney stone -- he, too, shall pass." 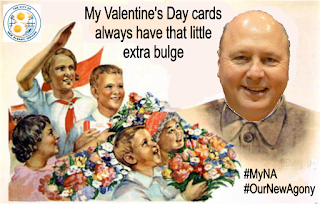 Let's hope, but as we observe Valentine's Day 2020, it remains that 46 idolatrous months are left to go amid Gahan III: For the Love of Money. It's never too early to begin handicapping "next," so let's look at the presumptive favorites should our monetizer-for-life decide to take a pay cut and make this term his last.

With Courtney Lewis unexpectedly decamping for a job in Louisville -- women and minorities need not apply for advancement in Newbany given Dear Leader's white male goon ol' boy network -- one springboard lies vacant, and Deaf Gahan has a position to fill as assistant to the city attorney.

After all, it takes two people to lift the typical bond bonus.

These days most of the gratuitous propaganda and photo ops are being handled by redevelopment's Josh Staten, although this has more to do with the city's invisible communications director than intentional campaign prep. Staten would be the ideal purely technocratic candidate, except that four-syllable words like "technocratic" are banned in Nawbany by ordinance (one of the few we actually enforce).

Jason Applegate has two months under his belt as an at-large city councilman, which is enough time to have sold Extol advertising to every municipal vendor. He'll be ambitious, whether from internal or external sources, and he previously has run a city-wide political race, which is important.

So has David Brewer, current township trustee. He's probably the oddsmakers' favorite to follow in Gahan's wake, at least at this point. Second most likely to aspire to power is current police chief Todd Bailey. Has the chief managed to escape the stain of his support for Irv Stumler in 2011? Bossman Jeff has a long memory when it comes to perceived slights.

These are your mayoral contenders for 2023, but only the Shadow (Squire Adam) knows for sure, and he's busy lining up Deaf's photo-op with Michael Bloomberg.

A month ago the Green Mouse asked why three street lights on the orphaned south side Market (between State and Pearl) had been non-functional since well before Harvest Homecoming last year. 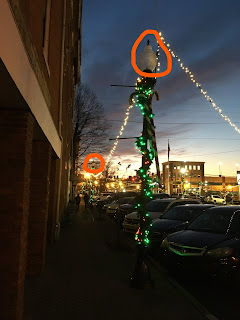 Lo and behold, the sacred gatekeepers appear to have been listening, and the job has been passed to Duke Energy. 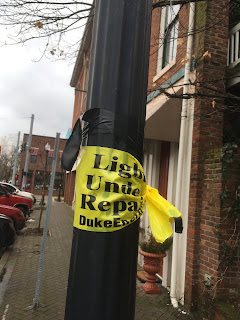 Yes, it was a slow news week. Still, there were two headlines.

9 million tons of Duke Energy's coal ash, the EPA's proposal to loosen regulations about it, and Earthjustice's lawsuit against the EPA.

As an aside, Recbar 812 was packed all last weekend in terms of physical space, even as expert denizens of cyberspace continued to complain bitterly that no one goes there owing to crappy parking. Similarly, as local media fawned over the announcement that 190+ apartment units will fill the former StemWood site on Grant Line Road, no one asked about the details or the subsidies, just decried the effect on traffic.

It's Valentine's Day, and many of you will celebrate it by washing your damn car.

In closing, at Curbed is a commentary about a phenomenon that Greg "Indiana Landmarks" Sekula recently discovered: "Public meetings are broken. Here’s how to fix them."

Held at times of day that can make it hard for many people to attend without missing work, usually without day care options, and sometimes in locations not favorable to those with disabilities or who rely on transit, these meetings already exclude many groups before they even start. Then there’s the matter of format: Experts and officials typically sit behind a table and give speeches and make presentations, with a microphone set up to take comments from neighbors who can spare the time to spend hours waiting for a few minutes on the mic. No surprise that a Knight Foundation study from 2010 found that attending a public meeting didn’t make residents feel more or less connected to their communities.

Your wrong. The mayor's successor hasn't been born yet.