The narcissism of car-centrism, part 3: "How Lazy Coverage of Pedestrian Deaths Obscures Why Streets Are So Dangerous." 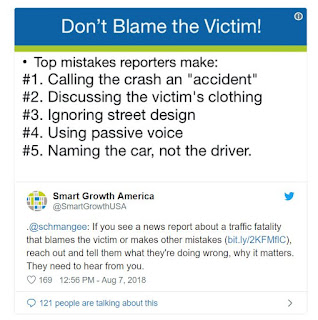 Apart from lazy coverage, I'm trying to remember the last time Louisville metro police and prosecutors took longer than ten grudging minutes to absolve drivers from blame when non-vehicular human beings have been killed by drivers.

It is exceedingly rare, isn't it?

Ever wonder why it's always the car that kills and not the person piloting it?

How Lazy Coverage of Pedestrian Deaths Obscures Why Streets Are So Dangerous, by Angie Schmitt (Streetsblog)

When a driver kills someone on foot, is it an act of God, beyond anyone’s power to prevent? Or is it the result of a broken system in desperate need of reform?

To read the coverage of the May 31 killing of 80-year-old Arnulfo Salazar in Charlotte, North Carolina, you’d think it was a random, unpreventable tragedy. Or that Salazar could have saved himself if only he’d been more careful. The stories don’t convey any sense that Salazar was failed by a hostile and unforgiving system.


Let's skip to the conclusion.

One thing that’s certain, however, is that journalists should be more skeptical of police accounts of pedestrian deaths.

Far too often, police rely exclusively on the testimony of the driver — the victim can no longer tell his or her story. And when the only version of events that gets reported is a story that absolves the driver while blaming the victim, the public discussion of street design and driver behavior won’t even mention possibilities for reform. And that means more people will lose their lives.